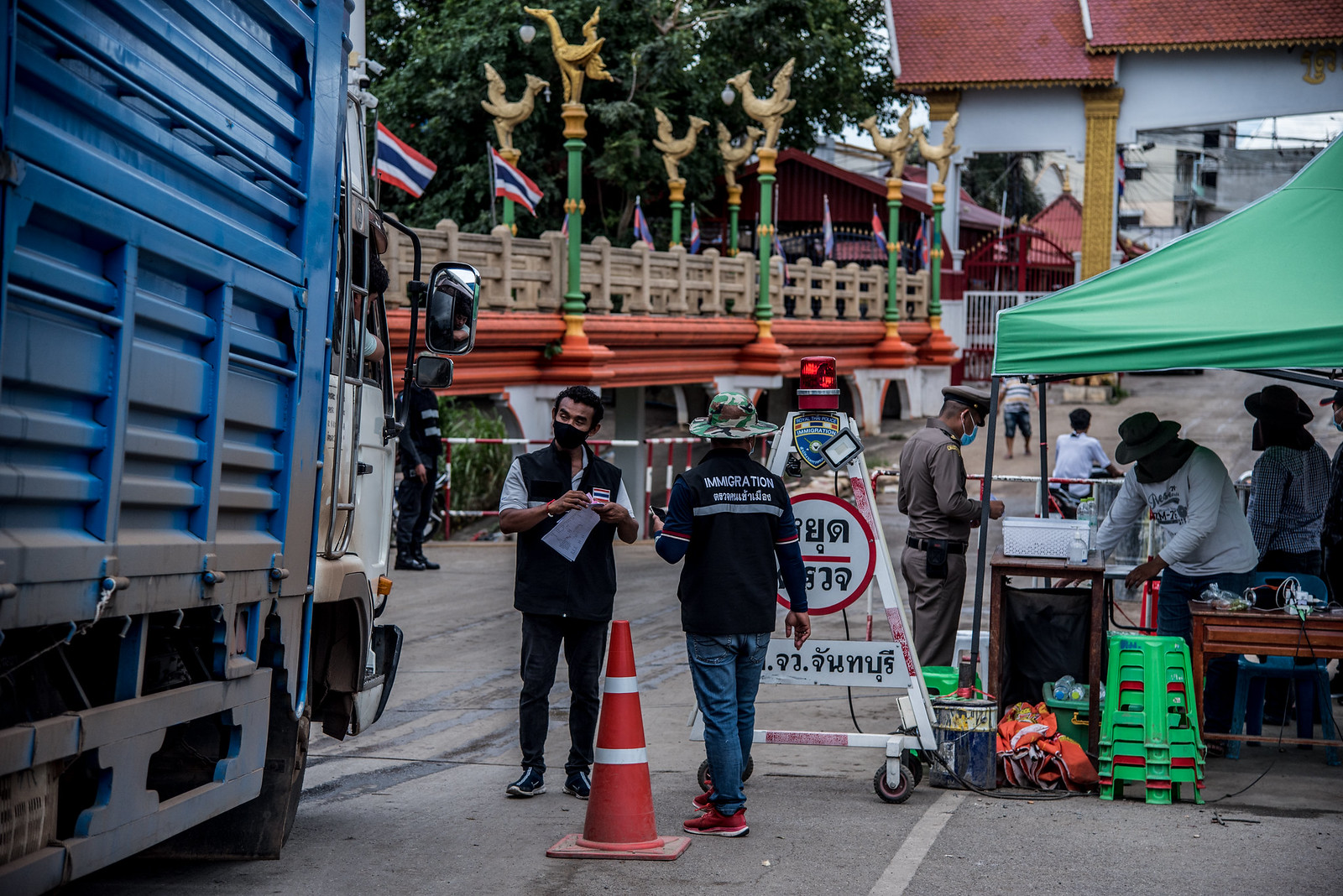 Nevertheless, the Army promises to deploy more assets to patrol the border areas.
Photo By: Some Rights Reserved byWHO Thailand

Mandated to patrol borders to ensure that no one enters the Kingdom illegally, officials in the Thai Royal Army admitted that they are having difficulties in completely sealing off the Kingdom’s borders.

This comes after the Ministry of Public Health has confirmed that migrant workers from troubled Myanmar are directly involved in the full-blown outbreak of the COVID-19 in Samut Sakhon province.

According to Army Spokesperson Lt. Gen. Santipong Thammpiya, illegally entering migrant workers continue to pour into the Kingdom through natural channels despite an increased alert in the units that are manning the porous border of Thailand.

“Our border is 5,526 kilometers long,” Lt. Gen. Santipong pointed out.

Lt. Gen. Santipong highlighted Tak, Chiang Rai and Kanchaburi as some of the most “porous” points in Thailand’s borders that illegal migrants from Myanmar are using to enter the Kingdom. To combat this, he said that the army will be allocating more resources including drones, mobile patrol units and razor-wire fencing in high-risk areas.

Despite the difficulties, Lt. Gen. Santipong said that they had recently arrested 279 Burmese nationals. These illegal entrants were caught in three different border crossings in three provinces. After being apprehended, the Thai army turned the Burmese over to their own authorities.

In response to the outbreak in Samut Sakhon, the army general said that they have sent 200 soldiers to the province to assist in providing security and for manning checkpoints.

On the other hand, Institute for Urban Disease Control director Dr. Vichan Pawun said that the outbreak, which is centered on a shrimp market in Muang district, might have been caused by migrant workers in the province.

According to Dr. Vichan, they have initiated an analysis of the movements of the epidemic, and results are pointing towards Burmese migrant workers as possible sources of the new outbreak.

He revealed that 90% of the people who tested positive for COVID-19 in Samut Sakhon were migrant workers from Myanmar. Dr. Vichan said that this could have been caused by migrant workers living in crowded accommodation, and commonly forego wearing face masks.

As of Monday, he said, 788 of the 821 infected patients in Samut Sakhon were migrant workers. There are only 33 Thais infected so far in the province.

Contact tracing and testing still ongoing, with 4,688 people already tested over the weekend. There are still 5,612 individuals living within the high risk areas that are yet to be tested. The Ministry of Public Health expects to finish testing this cluster today.

Dr. Vichan also identified the areas with high risk for infection. These are the shrimp market and its nearby areas, which he gives a 42% possibility of infections. The farther away a person lives from these two areas, the lower the risk.

He said that they will be monitoring the rate of infection of people living outside the two high-risk areas. If the infection rate remains at 6%, Dr. Vichan said that the outbreak could be brought under control within a month.

In line with this, the Ministry would be testing all Myanmar migrant workers in the Kingdom to spot further infections.