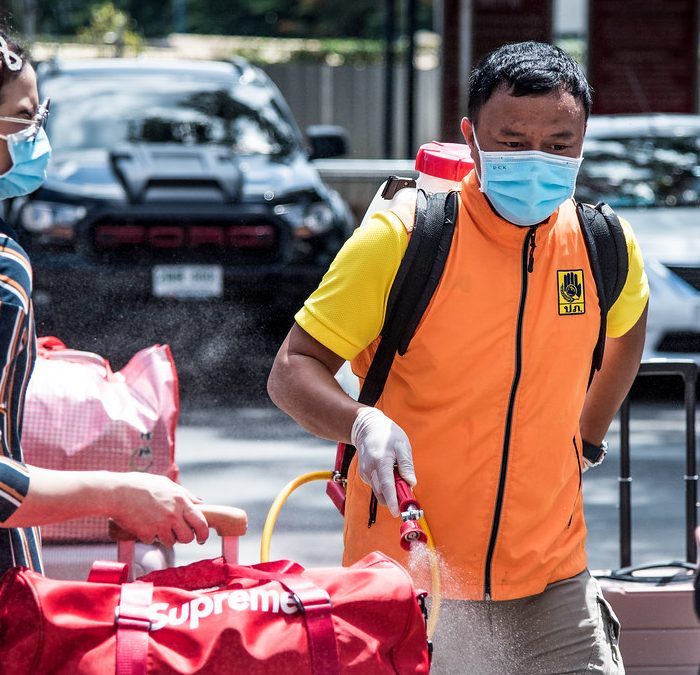 526 cases were found through active case-finding.
Photo By: Some Rights Reserved byWHO Thailand

The Center for COVID-19 Situation Administration announced on Friday afternoon that it has found 586 new cases of infection of the COVID-19. This brings the total number of cases in the Kingdom to 22,644.

According to CCSA assistant spokesperson Apisamai Srirangson, 573 of the cases are local infections. 526 of these local cases were discovered in communities through active case-finding. 47 cases were reported by hospitals where the infected were tested and then admitted for treatment.

The final 13 new cases are imported from international arrivals.

In addition, 548 of the new cases were found in Samut Sakhon, the epicenter of the second wave. 522 cases were found through active case finding, in which 519 Myanmar nationals and three locals were found positive for the COVID-19.

26 cases, comprising of 12 locals and 14 Myanmar nationals, were reported from hospitals in the province.

Bangkok accounted for 18 new cases, all of which were found in hospitals. These cases comprise of 14 locals and four Myanmar nationals.

In Tak, two locals and one Burmese national were found positive for COVID-19 in provincial hospitals.

The Phetchaburi cases are connected with the Mahachai area of Samut Sakhon.

As for the imported cases, Dr. Apisamai said that 1 arrival each from the United States, Italy, Tanzania, South Africa, Rwanda, Germany, the United Kingdom and Myanmar were found positive upon arriving in the Kingdom.

Thailand currently has 15,331 recoveries, which means a recovery rate of 67.7%. 533 of these were discharged on Thursday. The remaining 7,234 cases are still undergoing treatment in hospitals all across the Kindom.

Dr. Apisamai credited the ongoing vaccination programs in many countries around the world for the falling number of imported cases in the Kingdom.

Several countries have already begun inoculating their population against COVID-19, including Myanmar, India, China, the United States, Britain and Israel.

Thailand is set to start the first phase of its own vaccination sometime this month once the initial 50,000 doses of AstraZeneca’s COVID-19 vaccine is delivered to the Kingdom.

In addition, Dr. Apisamai said that the CCSA is considering new measures which include compulsory quarantine for close contacts of a COVID-19 patient who neglect to self-isolate.

The rule would apply to people who have been sneezed or coughed at by a confirmed COVID-19 case, had a conversation for as long as 15 minutes with the infected person, or stayed together in a closed area with a COVID-19 patient for more than 15 minutes while not wearing a face mask.

If these people fail to self-isolate, health authorities will pick them up and bring them to the nearest state quarantine facility.

Dr. Apisamai said that they are also thinking of opening state quarantine facilities to low to medium risk individuals who prefer to stay there instead of self-isolating at home out of fear of passing the disease to family members.

More details on this proposal are expected next week, she said.