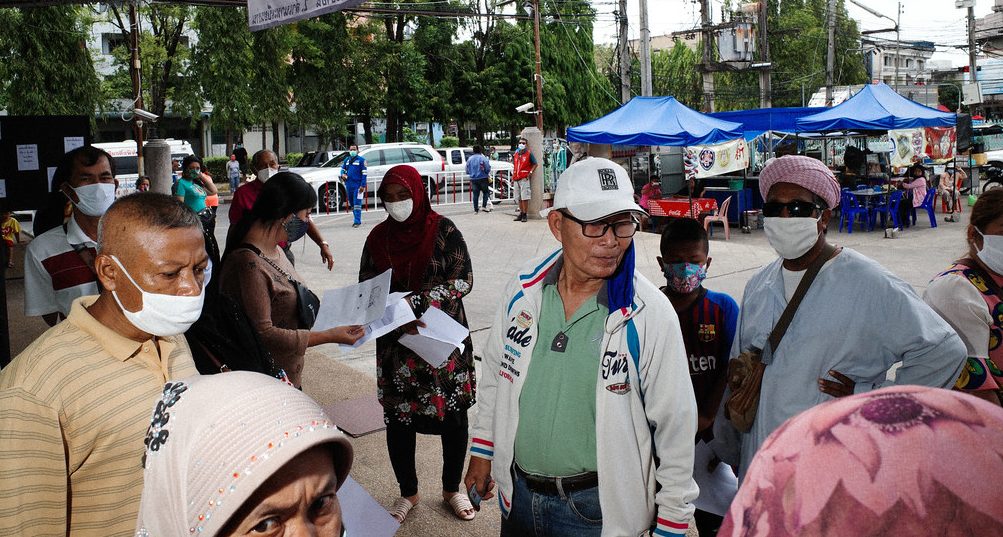 Recipients can get two monthly payments of THB3,500 each.
Photo By: Some Rights Reserved byt.thanat

The national government has approved the cash handouts intended to help out the people who are financially impacted by the second wave of the coronavirus in Thailand.

According to reports, recipients will be getting two monthly payments of THB3,500 in addition to other measures that are meant to ease the burden of the second wave of the COVID-19. They will also gain assistance in reduced electricity and water bills as well as receive soft loans if they are business proprietors whose enterprises are negatively hit by the virus.

The approval was given by the Cabinet during its weekly meeting on Tuesday, and was announced by Prime Minister Prayut Chan-o-cha himself.

However, the Finance Ministry is still working on the details of the actual cash handout and will be presenting the details during the next weekly Cabinet meeting on Tuesday.

Among the eligible parties are casual workers who have been rendered unemployed because of the COVID-19 outbreak that started in Samut Sakhon. Freelancers and farmers can also enjoy the benefits as they are not covered by social security.

In total, the government said that there are about 30 million recipients who are expected to benefit from the handouts. The government will be earmarking a budget of THB210 billion for the new round of cash handouts.

In addition, recipients’ electricity and water bills will be cut for February and March. Households that consume up to 150 units of electricity a month will only have to pay for 60 units. If they consume more than 150 units, they will also get discounts as well.

As for water, these charges will be reduced by 10% for the next two months. State-owned agencies and businesses are excluded from the program.

According to Prime Minister Prayut, the government will budget an estimated THB9 billion in order to subsidize the cuts in water and electric bills.

In addition, the Ministry of Digital Economy and Society, together with the National Broadcasting and Telecommunications Commission, will be negotiating with Internet service providers to reduce monthly Internet bills as well as to boost Internet speeds to benefit people who are working from home.

The Ministry is also negotiating with the providers to make free downloads of the Mor Chana app possible.

Prime Minister Prayut Chan-o-cha also said that the government will extend the co-payment subsidy to allow for 1 million new registrants. The government will be opening the program for new registrations by next Wednesday, with new members being able to participate in the benefits from January 25 onwards.

The co-payment scheme allows registrants to enjoy 50% discounts on certain items and goods bought from small vendors. The government guarantees the remaining 50% of the items’ price with the vendors.

Enterprises that have been negatively impacted by the COVID-19 can enjoy soft loans, with the government subsidizing up to THB200 billion.

According to Prime Minister Prayut, the Government Savings Bank will be lending THB10,000 to THB50,000 per debtor. Interest rates are only at 0.1% to 0.35% a month for these soft loans, the PM added.