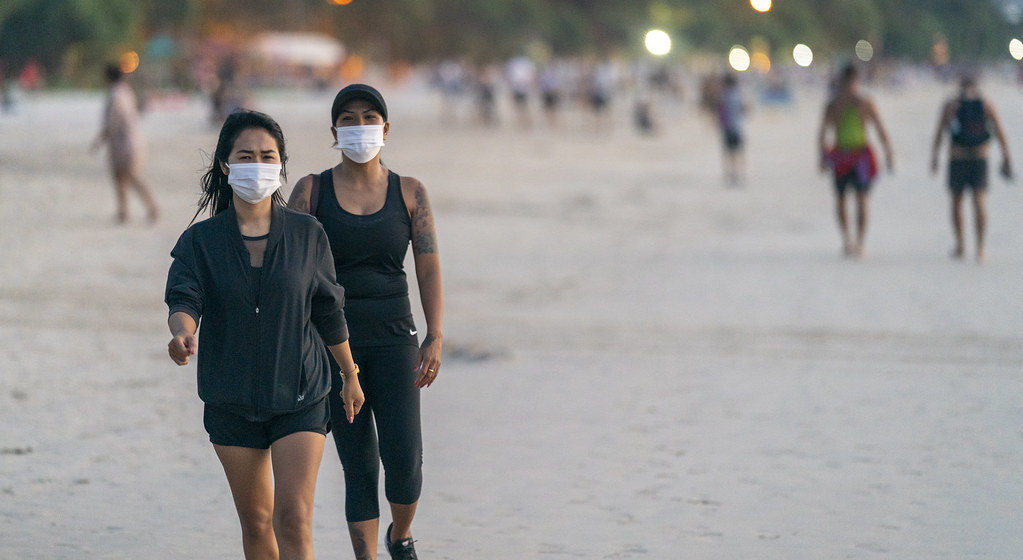 There are corresponding fines and imprisonment terms for violators.
Photo By: Some Rights Reserved byffagency.com

In the wake of a second outbreak of the COVID-19, the provincial government is mandating everyone in the province to wear face masks whenever they go out of the face or pay the government a hefty fine.

The Phuket Provincial Government issued the order, which was published by the Province’s Public Relations Department last night, 6:30 pm, January 7. The order is to be effective immediately.

The publication was done following the approval of the order by the Phuket Communicable Disease Committee, which is chaired by Governor Narong Woonciew. The order is officially designated as Phuket Provincial Order 62/2021.

“Any person who leaves their home, residence in a house, house, building, place or vehicle, or is in a public place must always wear a face mask or cloth mask,” the text of the order said.

Furthermore, the order describes anyone who refuses to wear a mask outside of the house as potentially creating “unsanitary conditions” that it then defines as catalysts for the spread of “dangerous communicable diseases or epidemics.”

The order only allows people to take off their masks when they are eating, drinking, or exercising.

For violators, the order slaps a charge of violation of Section 51 of the Communicable Diseases Act of 2015. This violation slaps the violator a hefty fine of THB20,000 each.

In addition, violations can also be considered as breaches of Section 52 of the Communicable Diseases Act. This is a separate violation, which exposes a person to fines of up to THB100,000. They can also be imprisoned for to up 1 year, or a combination of both.

The offenses can only be considered violations of the Emergency Decree under Section 18, which carries with it its own set of fines, penalties and corresponding imprisonment.

The order will remain in effect unless waived by the government authorities.

As a result of the second outbreak, hotels in Phuket are starting to close down again even as they have just reopened, a President of the Thailand Hotels Association Southern chapter told news reporters.

According to President Kongsak Khoopongsakorn, the lack of domestic tourism caused by fears of the second outbreak are driving hotels back into closing down following a spate of cancellations.

“As a result of the new outbreak of COVID-19, some hotel operators are considering temporarily closing their hotels again because a lot of bookings have been cancelled,” he said.

Costs continue to rise, and “they cannot handle the costs,” he added.

Mr. Kongsak explained that, although there is no presence of the virus in Phuket, the target market for the hotels are made up of people coming from the high-risk provinces, five of which are under lockdown as “maximum control zones” by the government.

Mr. Kongsak warned that the current outbreak is causing “long-term damage” to the tourism in the island province of Phuket alone.

He said that his organization had expected the tourism sector to bounce back by the end of this year, but the new outbreak has changed everything.

“The effect from the virus outbreak on Phuket’s tourism industry may last until 2024,” he said.