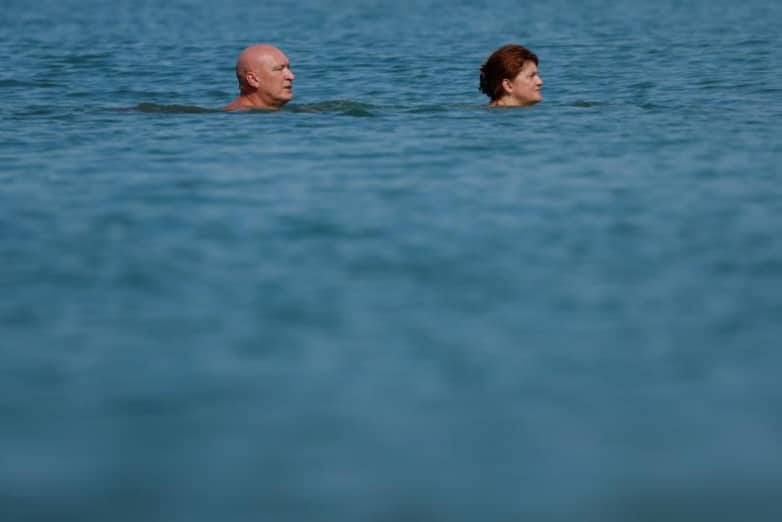 In Phuket, July 13, 2021, a couple walks in the water as Phuket stays accessible to international visitors, enabling foreigners who are completely vaccinated against the COVID-19 to enter the resort island without quarantine. (Reuters file photo)

Authorities would help travelers who remained in the province for 14 days but could not leave because of stricter Covid-19 limitations under the Phuket sandbox program.

Governor Narong Wunsiew of Phuket said he would consider the idea of transferring visitors to Bangkok through the sandbox tourism program with the CCSA once flights were suspended due to travel restrictions.

The sandbox scheme initiative started before the delta variant outbreak. Those who have remained in the country for 14 days and want to return may fly home. There are flights available to transport them.

“However, those who have stayed on the island for 14 days and want to visit other provinces could not do so in the wake of the Covid-19 outbreak. Each province has followed Covid-19 restrictions imposed by the CCSA. We will raise this issue for discussion with the CCSA to find ways to help them,’’ said the governor.

The tourist office wanted them to remain in Phuket. Numerous tourism-related programs have been offered, according to Ms. Nanthasiri.

If they want to come back home, vehicle services will be provided, and Nok Air will provide flights and pick them up. Nok Air is ready to fly an empty aircraft to the island.

Provincial officials met with the Civil Aviation Authority of Thailand, which confirmed that aircraft would depart from Phuket to U-Tapao between 3 and 5 August, according to Ms. Nanthasiri.

Between August 4 and 16, private operators in Phuket have organized fast bus services to transport visitors to Suvarnabhumi airport.

The bus service, which costs 1,500 baht per person, will operate on Mondays, Thursdays, and Saturdays.

As of August 1, 15,169 visitors have visited Phuket as part of the sandbox program, which started on July 1 and generated 818 million baht in income, according to Ms. Nanthasiri.

Americans were the largest group by nationality, followed by tourists from the United Kingdom, Israel, Germany, and France.

They spent an average of 50,000 baht each trip and stayed in hotels for 11 nights.