Return to the Beach for Vaccinated Foreign Tourists 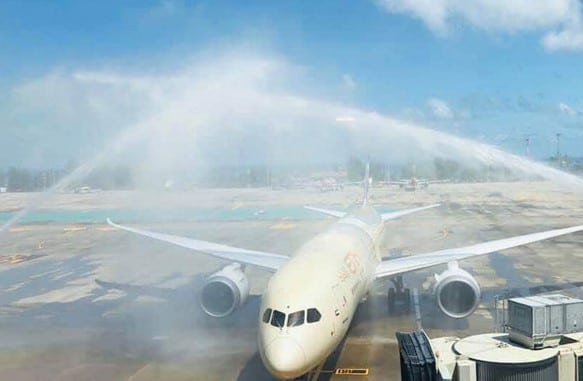 Phuket, Thailand’s most popular resort island, is now open for vaccinated foreign guests without undergoing quarantine.   However, with an increase of Covid-19 cases in Bangkok, fears are growing that the arrival of foreigners may trigger an outbreak.

But, Phiphat Ratchakitprakarn, Minister of Tourism and Sports, is against shutting the national borders to fight any new viral outbreaks in an interview with Bloomberg.

“We wouldn’t want to shut our borders again since it took a long time and was very difficult to achieve to this stage of reopening to foreign tourists,” Phiphat said during an interview yesterday.

Over 2 million employees have been laid off since the pandemic started, Chamnan Srisawat Tourism Council of Thailand head said, including more than a quarter of tourism-related companies closing temporarily.

However, even with Phuket as the region’s first tourist destination to reopen under a “sandbox” scheme will serve a model for other famous tourist destinations, local businesses and tourism industry observers are agree that it will take quite some time to come back to the pre-pandemic condition.

Thailand received almost 40 million tourist arrivals in 2019 before the pandemic. The country is optimistic that Phuket’s soft reopening would open the way for the reopening of other tourist destinations like Koh Phangan and Koh Samui – renowned for its full moon parties – on July 15.

In an interview with Bloomberg, tourism minister Phiphat told reporters that 100,000 guests would visit Phuket island for the next 3 months. Going at this period will be more expensive because of the mandatory requirements such as numerous tests and Covid-19 insurance. “Travel expenses here maybe around 50,000 baht a week before to pandemic, but now it will be at least 70,000 baht per week,” he added.

Etihad arrives in Phuket at 1100 on July 1 to kick off the Sandbox travel program.

The Tourism Authority of Thailand (TAT) stated that Israel’s El Al, Cathay Pacific,  British Airways, and Emirates have also confirmed flights to Phuket, which would have over 1,300 lodging, tour agencies, and restaurants available to guests as of June 26.

However, this is a small number compared to what Phuket always had to offer. “Phuket announced 120,000 hotel rooms before, but only around 30% of them will resume in July,” Bhummikitti added.

In a recent seminar, Phuket Hotels Association president Anthony Lark said that he believes occupancy rates to a range between 10% and 20% from July to October, higher from less than 10% since COVID-19 began last year. Occupancy may increase after October when the island’s peak season begins, he added.

Wari, who runs a 30-room accommodation on Patong beach, said that there was no sense in reopening this week since the country and the World Health Organization (WHO) – had not yet authorized the Russian-made Sputnik vaccine. “For the last two decades, I’ve mostly served to Russian guests,” said Wari, who requested that his name be altered for this article. The sandbox program is only available to guests who have obtained vaccines authorized by WHO and Thai, which Bhummikitti described as “missed opportunities.” Additionally, travelers to Phuket must stay in businesses with a Safety and Health Administration Plus (SHA Plus) accreditation for a minimum of 14 days before being permitted to travel to the rest of Thailand. To get accreditation, at least 70% of the workers of the business must be fully immunized.

However, several company owners did not register for SHA Plus due to their difficulty complying with specific requirements. Additionally, businesses on the island suffer labor issues since more than 80% of employees come from other places.  Wari said that since most Thais had not received their complete vaccinations, they are unlikely to return to the island.

Phuket’s reopening meets with another lockdown in Thailand’s capital, Bangkok, due to increased COVID-19 cases. Thailand has recorded almost 255,000 cases as of Tuesday, including more than 220,000 from April to June this year. Experts have cautioned that this may negatively impact the country’s reputation when visitors need to feel secure about coming, particularly given the country’s lagging vaccination efforts. As of Monday, Thailand has delivered 9.4 million doses, with 2.6 million individuals wholly vaccinated.

To vaccinate 50M by the end of the year and establish herd immunity, the administration guarantees that close to 485,000 individuals get a vaccine daily, but that figure is much lower. On Monday, just about 269,000 doses were administered. Phuket, where vaccines have been expedited in advance of the scheduled reopening, has maintained a low daily infection rate. Since April, about 700 new cases have been recorded, compared to over 60,000 in Bangkok over the same time.

This story published in South China Morning Post with the headline: Phuket takes baby steps out of Covid-19 pandemic with ‘sandbox’ plan for vaccinated foreigners