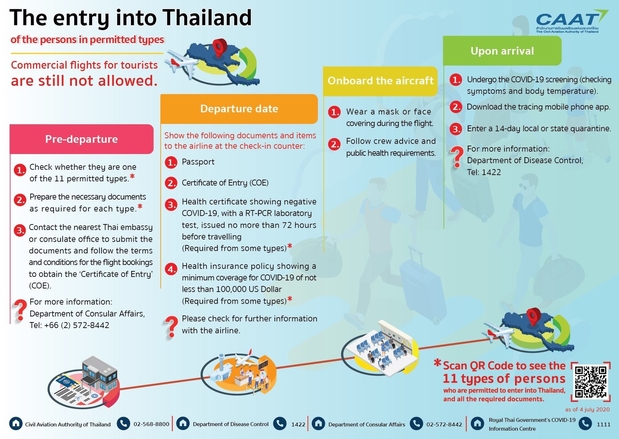 As the Thai government is preparing to reopen its borders to foreign nationals early next month, the Civil Aviation Authority of Thailand has released guidelines that these people have to strictly follow once they’ve arrived into the Kingdom.

According to an infographic released on the CAAT website, foreigners returning to Thailand need to follow these steps as outlined below.

Before departure, these steps to be strictly observed:

They will need to present the documentary requirements in the airline check in counter on their day of departure to Thailand.

Upon arrival, they will be subjected to COVID-19 screening in the airport. They will need to install the mobile tracing app as well before undergoing the mandatory 14-day quarantine.

Who Are These Foreign Nationals?

It had been previously reported that the Thai government is going to allow entry for five groups of non-tourist foreigners once the borders have been reopened. These five groups of workers are, namely:

On Wednesday, the Bangkok Post reported, the government has approved the addition of the following groups who will be allowed entry upon border reopening:

This was confirmed by the spokesperson for the Centre for Covid-19 Situation Administration, Dr. Taweesilp Visanuyothin.

According to the report, the Labour Ministry seeks to bring in laborers from neighboring Cambodia, Laos and Myanmar to fill in demand for labor in the construction industry. These will include 69,235 workers already issued work visas before the pandemic, with an additional 42,168 workers who were in the processing of procuring work visas.

Dr. Taweesilp told reporters that construction companies employing these workers will be providing their own quarantine facilities in lieu of the conventional “state quarantine.”

In addition, more than 6,000 foreign exhibitors are expected to enter Thailand in between September and December for their respective events. They will enter into alternative state quarantine facilities for their accommodation, to be overseen by the Thailand Convention and Exhibition Bureau.

The same arrangement is to be expected for film crews who will be coming to Thailand to shoot their projects.

Medical tourists will undergo quarantine while undergoing their scheduled treatment. After the mandatory 14-day quarantine, they will be able to visit local destinations.

As for the Thailand Elite program, which has more than 7,000 members, the CCSA spokesperson said that an initial 200 members from abroad will be welcomed back into Thailand. This will be overseen by the Tourism and Sports Ministry, he added.