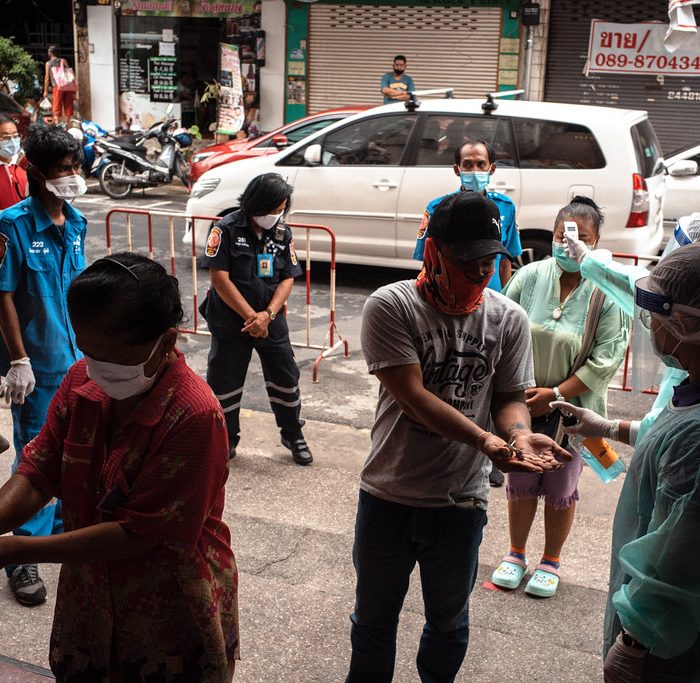 These cases were not included in the daily CCSA report yet.
Photo By: Some Rights Reserved bySakulchai Sikitikul

A record-breaking 900 new cases have been recorded in the outbreak hotspot Samut Sakhon today. Because of this development, provincial health officials are mulling over turning factories in the area into quarantine areas and field hospitals.

There are now 2,296 cases in Samut Sakhon province alone. A majority of these cases have been detected through proactive testing of the population. Disease Control Department director general Opas Karnkawinpong added that, in addition to Samut Sakhon, 45 provinces have reported cases that can be traced directly to the province and the shrimp market.

This report has not been submitted yet to the Center for COVID-19 Situation Administration, and were thus excluded from today’s COVID-19 report. National news reported only 365 new COVID-19 cases and 1 new death through the CCSA.

The proactive testing begun last month when cases began to spike in Samut Sakhon. The outbreak was later found to be centered on a seafood market and fishing hub in the Mahachai area, where a huge number of migrant workers had visited and were found to be infected by the COVID-19.

Locals had also visited the Shrimp Market from various provinces and some carried the virus with them there.

In response to the outbreak, the government has set up a field hospital in the Shrimp Market itself where mostly migrant workers found to be positive from COVID-19 are currently being treated. Health officials also carried out an aggressive contact tracing and testing procedure in the areas around the shrimp market, finding mostly migrant workers as patients.

The provincial government of Samut Sakhon locked down the province until January 3rd.

Dr. Opas said that they might turn a number of factories into quarantine areas for its infected employees, if they find a significant number of their workforce as infected by the COVID-19.

Thailand’s latest fatality to the COVID-19 is a 63-year-old Thai. He made a living driving migrant workers to and from work in Samut Sakhon. According to the CCSA, the man admitted himself to the hospital on December 27.

However, the man died yesterday after experiencing multiple organ failure.

Dr. Taweesilp Visanuyothin, CCSA spokesperson, said that 250 out of the 365 reported cases by the CCSA are cases of local transmission. 99 cases were detected in migrant workers, while 16 arrivals from abroad also tested positive.

Dr. Taweesilp said that they, public health officials, are determined to stop the spread of COVID-19 among the numerous factories found in Samut Sakhon and affecting their migrant workers.

He said that they will be checking all these places that migrant workers in Samut Sakhon were found to be staying, including the Muang district.

Samut Sakhon has more than 10,000 factories in its jurisdiction.