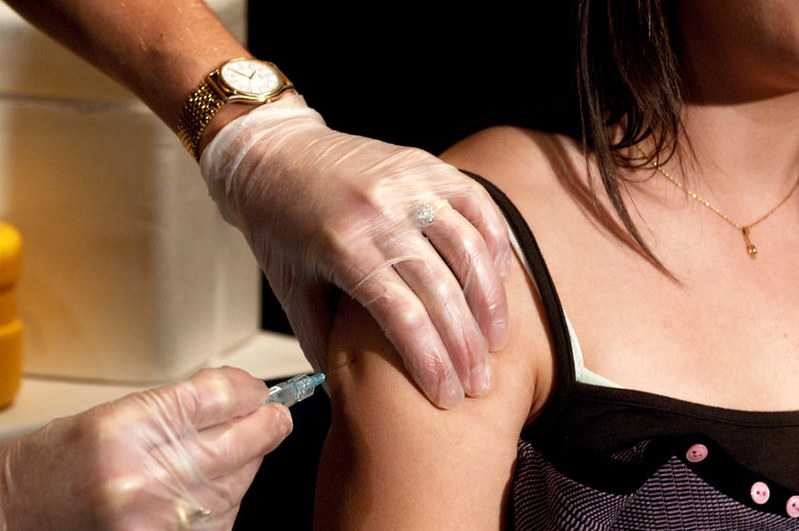 The BMA wants to vaccinate up to 600 people per day to prevent the spread of disease.
Photo By: Some Rights Reserved byVCU CNS

To curb the spread of disease from the new epicenter, Bang Khae District, the Bangkok Metropolitan Administration plans to fast-track immunization in the district beginning today, Wednesday.

The vaccine rollout will proceed in the next 10 days, and the BMA targets a rate of 500-600 people per day. This means that the BMA wants to have about 6,000 people vaccinated against the COVID-19 at the end of that time period.

The vaccination will target market vendors and their close contacts. The vaccine will be administered to the recipients in Bang Khae market itself, or at local hospitals in the district.

Police General Aswin Kwangmuang, the governor of the BMA, said that people who believed they are at high risk after coming into contact with confirmed cases can request to be vaccinated at the hospitals.

This decision was reached by the BMA after its subcommittee on the management of COVID-19 vaccines convened to discuss the issue of distribution.

According to the Department of Medical Services director-general Dr. Somsak Akasilp, they will be allocating the vaccines to people who had been previously tested and were either positive but asymptomatic, or those who had tested negative during the active case finding.

Symptomatic individuals, however, will not be receiving the vaccine. Symptoms to watch out for are fever, coughs, chest pains and hypertension.

Bangkok had accounted for 69% of the total number of cases in the past 24 hours. This translates to 100 new cases.

Department of Disease Control’s Dr. Chawetsan Namwat, who heads the control of acute disease and health hazards sub-unit, said that the new cases that surfaced in the capital are a direct result of transmission from the Bang Khae district.

To prevent further infection, authorities have shut down six markets in the district for at least three days, which ends tomorrow, while personnel are conducting disinfection of their premises.

Health officials have previously indicated that they will extend the shutdown of the markets if more cases are detected.

Furthermore, Dr. Chawetsan added that the movement of people in and out of these markets will be controlled once they reopened. Vendors must also be vaccinated because they will be allowed to reopen.

Aside from the markets, the BMA also suspended activities and access to the elderly social welfare in the district until the end of this month.

Rujira Arin, office director of the district, said that, in addition to disinfection, they will also be conducting additional construction in the six markets in order to improve the ventilation in their jurisdiction. They will also need to clean up drainpipes to prevent contamination.

The new cluster at Bang Khae follows in the heels of the second wave in Samut Sakhon, where an infected vendor unknowingly spread the virus to other vendors in the Central Shrimp Market as well as customers coming in from various provinces in Thailand.

The second wave spread to more than 60 provinces in the Kingdom, but is now declared as under control after three months.