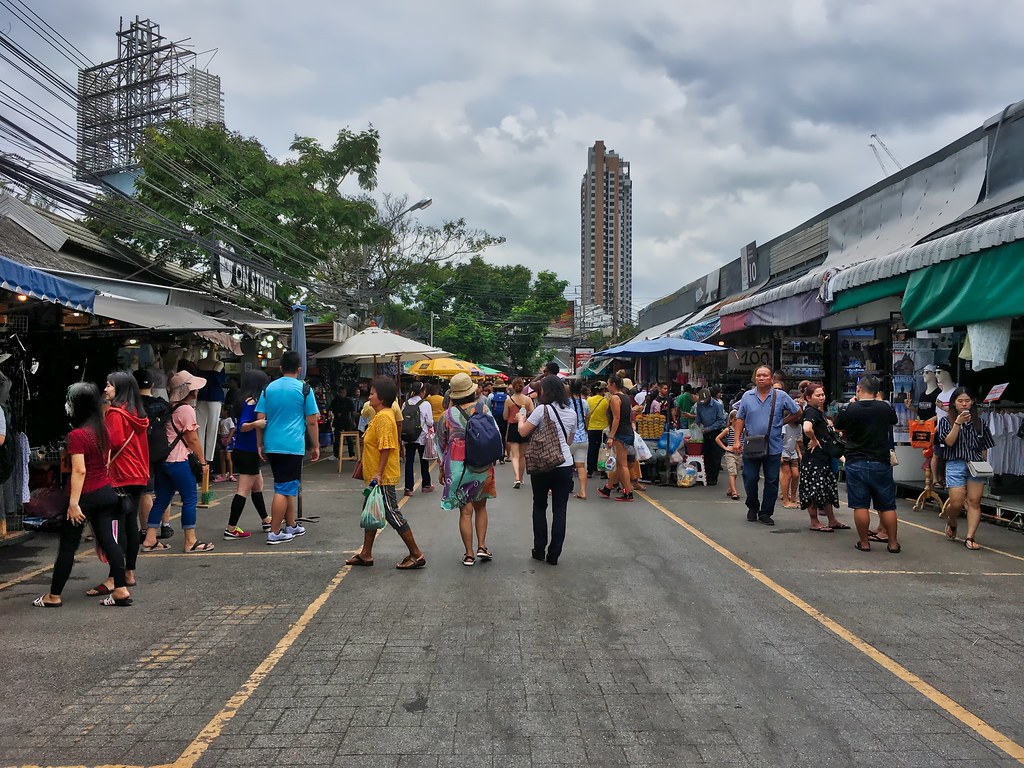 The market will be open Tuesdays until Sundays.
Photo By: Some Rights Reserved byUweBKK (α 77 on )

As the capital keeps up with a new cluster of infections in the Bang Khae district, the Bangkok Metropolitan Authority is allowing one of the largest and most popular weekend markets in its jurisdiction to now operate six days a week.

According to the BMA’s committee on market management, the Chatuchak market will now operate from Tuesdays until Sundays. It will be closed on Monday to allow utility personnel to dredge and clean the gutters to maintain the sanitation of the market, which is home more than 10,000 vendors.

According to BMA deputy permanent city clerk Wullaya Wattanarat, these vendors have lost a significant amount of money and half of their customers in total because of the onset of the COVID-19 pandemic.  The slowing down of the economy and the diminishing spending power among consumers also contributed to their woes.

Bangkok Governor Aswin Kwanmuang has also asked the BMA committee on market management to come up with promotional efforts to advertise the vendors’ businesses and also to provide them with support.

Vendors with stalls inside the market are allowed to sell until 6 pm in the evening on weekdays, Tuesdays to Thursdays. From Friday to Sunday, they will be allowed to remain open until 10 pm.

To promote businesses and to attract people to explore the interiors of the market, the government has organized events that will be held around the Clock Tower. This decision was made after vendors with stalls deep inside the huge market complained that nobody was visiting them reportedly due to inconvenience.

Ms. Wullaya also spoke on the government’s ongoing efforts to give the market a facelift.

For instance, they have already demolished stalls and other structures that were build alongside gutters, which can cause congestion and clog the gutters. They are also working on removing similar structures along the market’s perimeter fences as well.

Ms. Wullaya said that the BMA expects these efforts to be completed around the middle of April. This timetable is also just in time for the opening of the market under the six-day week schedule, with the BMA official saying that the facelift will “certainly” be completed at that time.

The BMA is also calling on the market’s vendors to collaborate with the government in discussing key issues. Right now, they have asked the 31 zones in the Chatuchak market to nominate one person as representative. These representatives will be in charge of forwarding concerns and issues to the BMA.

Ms. Wullaya said that the government considers the development of the market to ultimately help vendors as part of its policy. Thus, the BMA is calling on all the stakeholders to cooperate and collaborate with the government’s efforts to push the market to consumers.

Aside from opening the market for six days, the government also lowered the rate of rent in 10 of the markets that it maintains including Chatuchak. The lowered rate in rent is intended to allow vendors to save money and get rid of a significant burden while the pandemic is still ongoing.