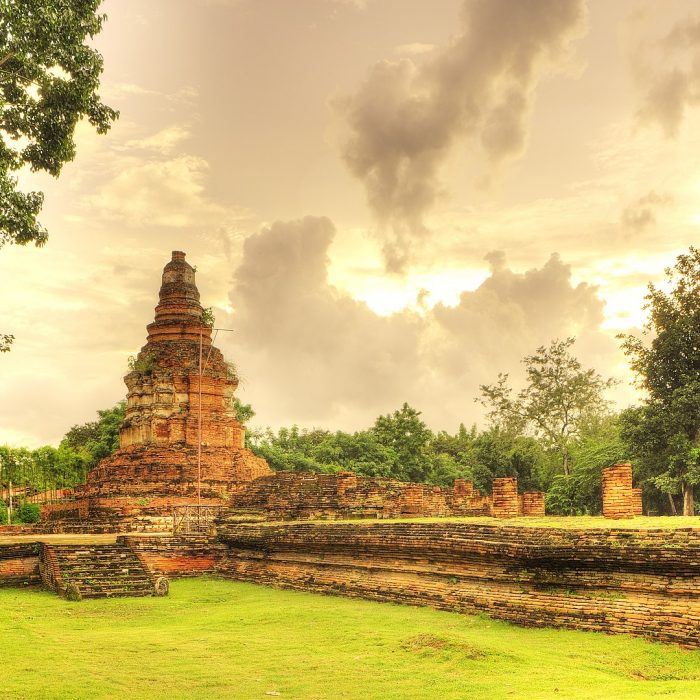 The site will host activities every 2nd and 4th Saturday of the month until April next year.
Photo By: Panupong Roopyai / CC BY-SA 3.0

A well-known archaeology site in the province of Chiang Mai has announced a slate of activities up until April next year in order to stimulate the province’s tourism industry and bring much-needed revenues to the sector’s businesses.

Wiang Kum Kam is organizing activities that they will host twice each month, from November until April of next year. The project kicked off yesterday, October 31, with the Governor of Chiang Mai, Charoenrit Sanguansat in attendance.

The Wiang Kum Kang site has been established to preserve and study the ancient city of the same name. The city is said to have been established in the 8th century and was the capital of the Haripunchai Kingdom. The city was also the center of the Lanna Kingdom until 1296, when it was replaced by the city of Chiang Mai.

The site is only five kilometers to the south of Chiang Mai. It sits by the banks of the Ping River, and is a wealth of stone tablets inscribed in Mon hieroglyphics, as well as religious sculptures related to Buddhism, and ancient earthenware and pottery.

The campaign, which is dubbed as the “Land of Wiang Kum Kam Pathom Nakhon Ratchatani Lanna, Dharma Land, Golden Land of Happiness” project, will expose tourists to the historical value of the site. Along the way, the tours will also showcase travel routes that they can use to access the district in the future.

It is also the aim of the program to expose visitors to other tourist attractions in the Saraphi District, in the hopes of driving tourism revenues to any businesses along the way.

The site will host activities every second and fourth Saturday of the month. The activities will last April 12, in order to coincide with next year’s Songkran Festival and connect to the festivities.

Both the national and provincial governments in Thailand have been seeking ways to promote domestic tourism, in order to stimulate the economy and drive revenues while a full reopening of foreign tourism is still in the works.

In July, when restrictions on domestic air travel were lifted, the government launched the “We Travel Together” stimulus package that aimed to subsidize 5 million room nights for locals who register to the program and travel around the country.

Originally set to expire yesterday, the stimulus package was extended and is now valid until the end of the year.

Tourism Authority of Thailand Yuthasak Supasorn said that they are easing up on rules to make the package more inclusive. For instance, the elderly can now join the program.

Governor Yuthasak also said that they are negotiating ways in order to make it possible for travelers to gain instant discounts on air tickets. Previously, travelers had to check in to their hotel rooms first before they can receive the subsidy for their airline tickets.

The TAT Governor also said that the government is working to introduce additional perks like vouchers for spa and massage services.

In the meantime, the government is slowly reopening the country to foreign tourism through the Special Tourist Visa. The first group of 39 Chinese tourists from Shanghai are already one week into their mandatory 14-day quarantine.