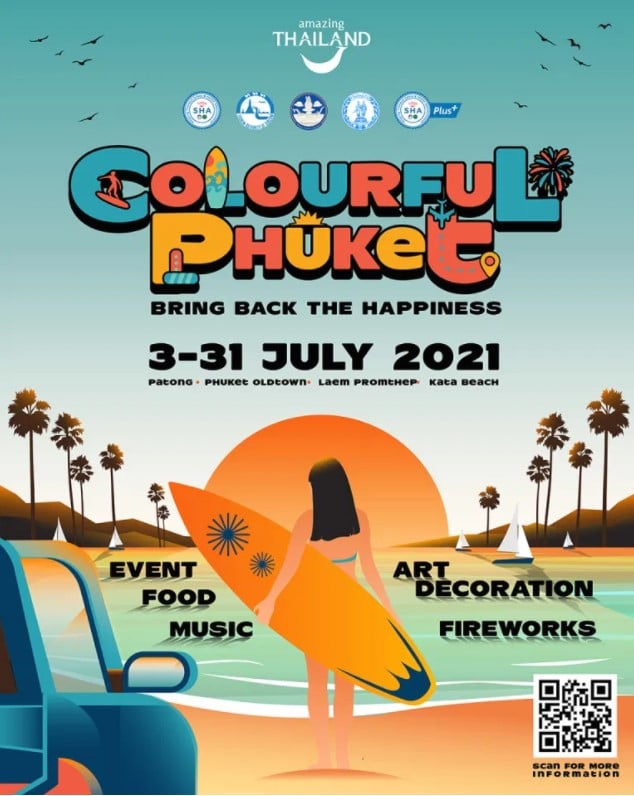 Starting July 3, The Tourism Authority of Thailand joins in a month-long ‘Colourful Phuket Festival’ on Patong Beach and Phuket Old Town. Additionally, the festival, which is co-organized by Phuket Province and the Ministry of Tourism and Sports, includes an exciting lineup of art, live music, fireworks, food truck cuisine, and sea sports, continues until the end of July.

Governor of TAT, Mr. Yuthasak Supasorn, said, “The Colourful Phuket Festival has been planned to align with the July start of the Phuket Sandbox and to offer the first of many, many visitors returning to Phuket with exciting and engaging activities.” The big opening at Patong Beach, Phuket’s most renowned beach and a tourist magnet, runs from 15.00 hrs with local food trucks offering delectable cuisine. Between 19.30 and 20.00 hours, fireworks and fire display activities will brighten the evening.

Also, the event includes a ‘projection mapping’ sound and light display from 19.30 to 20.00 hours at the Peranakannitat Museum Phuket, which is situated in the Old Town district at the junction of Phuket and Phang Nga Roads. The ‘The Colorful Phuket’ Festival will after that take place in the following areas across the island:

Since July 1, over 1,300 foreign tourists have landed in Phuket in the last three days via the “sandbox” program. Thai government anticipates that about 100,000 international visitors would visit Phuket during the third quarter of this year, from July to September, reviving tourism after a long quiet period. According to a market study by Horwath HTL, a resort, and tourism consulting company, Phuket hotels project a steady U-shaped rebound beginning in 2023.

Executive of Accor for Japan, SoKor, and Japan Garth Simmons said that the most immediate need is to improve vaccination rates in the country to protect locals and boost the trust of eager international tourists.

He also added that the government should create a long-term tourism strategic plan in partnership with the business sector and local people to support the industry’s comeback.