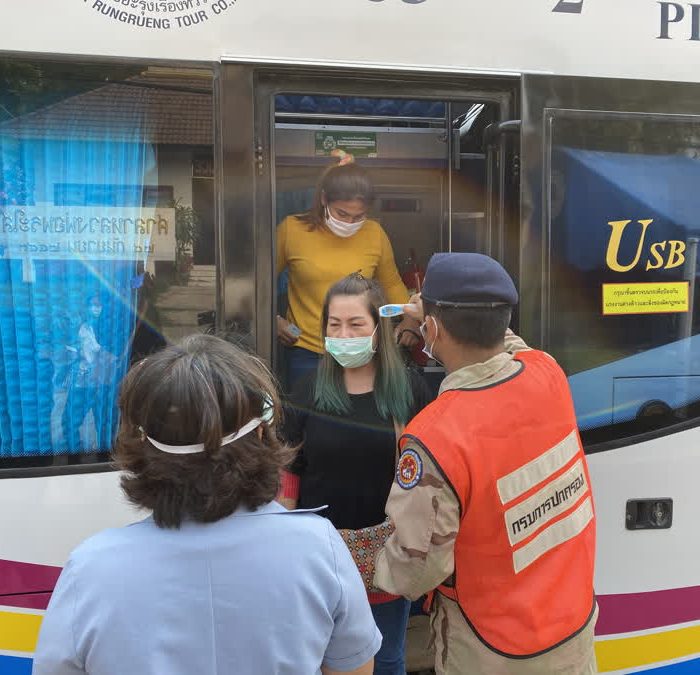 93 cases were found in a jail in Narathiwat province. Five inmates and a warden from the province’s Central Prison had previously tested positive for COVID-19 in Surat Thani.
Photo By: Some Rights Reserved byPrachatai

Thailand has seen a slight increase in the number of cases reported daily, with 194 new infections detected in the past 24 hours. Most of these cases are clustered in a jail and a number of pubs in the capital, Bangkok.

According to the Center for COVID-19 Situation Administration, many of the new cases come from the clusters centered on a jail facility in Narathiwat, and from bars in Bangkok itself.

The CCSA added that 95 of the new cases have been found through community case finding. Hospitals accounted for an additional 87 cases. The final 12 cases in the daily tally were detected from people arriving from abroad.

Of the cases reported by hospitals, the CCSA said that Bangkok accounts for 45 new infections in that group, with three foreigners included in the count. These foreigners comprise of two Japanese and one Canadian nationals.

Samut Prakan follows with 9 new cases, Chon Buri with 7 new cases, Samut Sakhon and Nonthaburi with 7 cases each, and 2 cases each for the provinces of Prachuap Khiri Khan, Chaiyaphum and Chumphon.

As for active case finding, 93 cases were found in inmates in a jail in Narathiwat, from which five inmates and one warder had been found positive for COVID-19.

The remaining two cases found through active case finding were from Bangkok and Pathum Thani. These two provinces only reported one case each from hospitals.

It was reported on Friday that five inmates and an escorting warden from Narathiwat had tested positive for COVID-19 while participating in an anti-drug event at Surat Thani. The group came from the Narathiwat Central Prison, and were representing the jail for the Department of Corrections’ anti-drug event held at the Diamond Plaza Hotel.

The inmates were housed at the Surat Thani Central Prison, while the warders enjoyed an accommodation in a separate hotel in downtown Surat Thani.

The Surat Thani Hospital informed the provincial public health office on Friday evening that the five inmates and warder had admitted themselves for treatment. The entire delegation of eight people were subsequently tested, where the aforementioned six people were found positive.

135 inmates at the Surat Thani Central Prison were subsequently tested for COVID-19, but the results were negative.

All the participants of the activity were asked to self-isolate until tomorrow, April 6, and to report symptoms when they appear. The Diamond Plaza Hotel was also subject to disinfection over the weekend.

Bangkok had previously reported 40 new cases on Sunday. These cases were clustered in entertainment venues in the capital, the Department of Disease Control under Dr. Opas Karnkawinpong reported.

Because of these rises in cases, the CCSA warned that the government could order the closure of areas in the country deemed to be hot spots for spreading infections.

With Songkran looming, Dr. Yong Poovorawan today warned that relaxing existing restrictions could cause another drastic increase in cases.