First Direct Flight From Oman to Thailand Lands In Phuket 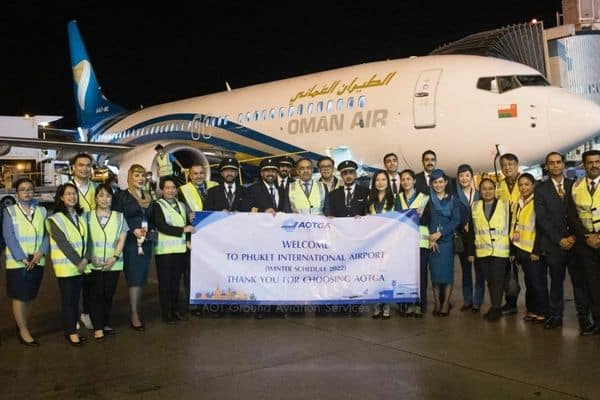 On November 14, a new direct flight from Oman arrived at Phuket International Airport. The Oman Air flight landed in Phuket from Muscat, Oman.

The flight carried 162 people welcomed by officials and received HKT gifts upon landing.

Recently, new direct flights have arrived in Phuket.  Aeroflot from Russia stated on November 12 that there will be 14 additional direct flights each week between Russia and Phuket. This was announced just 2 weeks after the successful comeback of Russian flights to Phuket.

Phuket also welcomed LOT Polish Airlines flight on November 7. There were 252 people onboard from Warsaw to Phuket.

On November 3, Sharq Airlines take the first flight from Uzbekistan and touched down in Phuket. The flight brought 238 people from Tashkent.

Currently. the number of international visitors visiting the country has surpassed 7 million. This puts the country within the target goal of the Tourism Authority of Thailand (TAT) of up to 10 million tourists by the end of 2022.  According to reports, Phuket International Airport is the 2nd busiest entry point in the country behind Bangkok’s Suvarnabhumi Airport.

The Tourism Authority of Thailand (TAT) reported in September that Malaysians constituted the largest tourist category in Thailand this year.  This is followed by tourists coming from India, Laos, and Cambodia.

The surge in flights from Russia to Thailand creates an opportunity for the return of Russian tourists to Phuket, which now has more tourist arrivals compared to India. From May through September, the average monthly number of Russian tourists ranges between 3,200 and 4,200. This number recently surged to 23,089 last month.

This November, the number of Russian tourists going to Phuket has surpassed all other nationalities. A quarter of the total 83,428 international tourist arrivals to Phuket were Russians.

The Tourism Authority of Thailand (TAT) aims to attract 10 million foreign travelers to the “Land of Smiles” by the end of this year.

Stay in Thailand with your family for 5 years or up to 20 years with Thailand Elite Visa.  This visa has been created to make your long-term stay in Thailand hassle-free and convenient.  For more information, CLICK HERE.