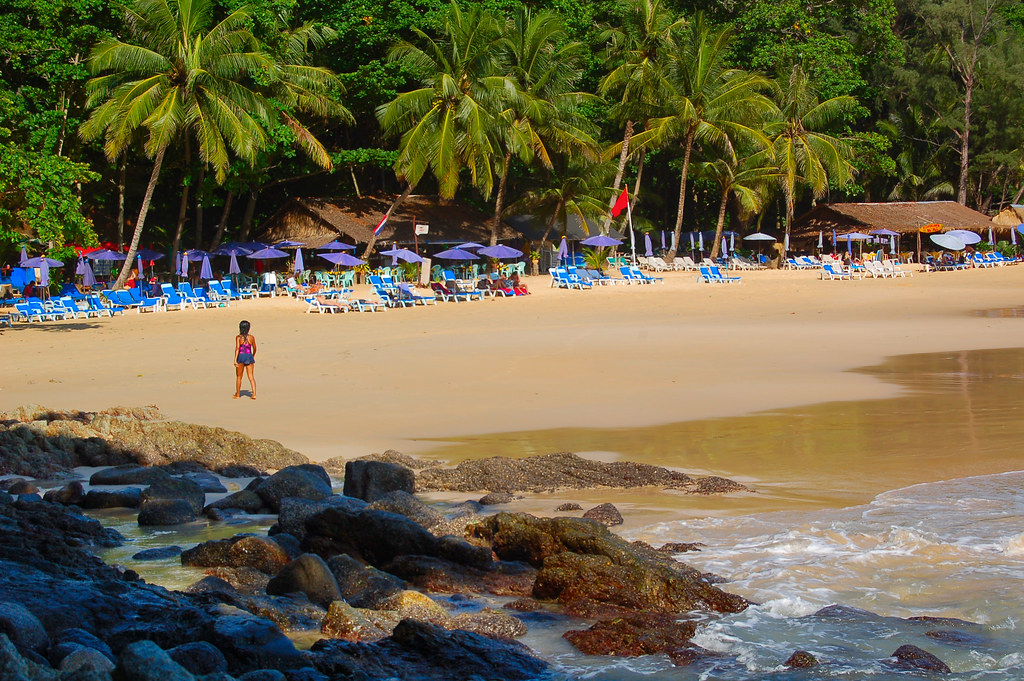 Another group of tourists will be arriving on May 8th.
Photo By: Some Rights Reserved byAlex Dansai

The first tourists to enjoy a reduced quarantine period arrived in Phuket yesterday morning, April 3. Officials in Phuket as seeing these tourists as a sign of hope that international visitors will soon return to the once-popular tourist destination.

According to Phuket News, the tourists arrived aboard Thai Airways flight TG921, an Airbus A359 flying directly from Frankfurt in Germany. Senior airport management were at the arrival area to personally welcome the tourists, who were then passed through immigration and clearing to officially begin their visit to Phuket.

Thai Airways International Executive Vice President Non Klintha said that there will be one more flight from Frankfurt to Phuket. The next flight will depart Frankfurt on May 7 and arrive in Phuket on May 8.

The carrier did not reveal any details on return flights for the tourists on board the two direct flights.

“We hope this will signal the start of tourists starting to return to Phuket and we are delighted to announce the international terminal at Phuket International Airport is now open,” Phuket Airport’s General Manager Thanee Chuangchoo said on Wednesday

Like a majority of provinces in Thailand, Phuket had enjoyed continuously growing tourist traffic in the years before the pandemic. However, when the emergency decree mandated border lockdowns last year in response to the COVID-19 outbreak, Phuket and these provinces suffered a crippling loss of income for the most of 2020.

As vaccinations have begun in the Kingdom, the government has approved the relaxation of several restrictions with an eye towards attracting foreign tourists this year.

The CCSA had announced that, beginning April 1, Phuket and five other provinces that contribute to tourism revenues can reduce their quarantine periods from 14 days to 7-10 days. Foreign arrivals from this point forward must be able to present a certification of vaccination upon landing in Thailand.

The vaccine must have been administered 72 hours before the date of departure from their country of origin. In addition, only vaccines that have been approved by the World Health Organization is recognized under the new rules.

In September, Phuket will also remove the quarantine requirement entirely under the Sandbox model. Instead of being quarantined, tourists will instead be allowed to visit places within Phuket only for the first 7 days.

In related news, the Center for COVID-19 Situation Administration said that a student from the Mahidol University who later tested positive for COVID-19 had also visited Phuket.

According to CCSA spokesperson Dr. Taweesilp Visayunothin, the student and a number of friends visited an entertainment venue in Nakhon Pathom’s Buddha Monthon District on March 23. He had reportedly refused to wear a mask during the said visit.

The group flew to Phuket and stayed in the island from March 25 to March 29. They returned to Bangkok on the 29th on board an AirAsia flight. The next day, he played badminton after returning to his dormitory in Tambon Salaya.

He came into contact with more than 50 people in Mahidol University on Wednesday. He also learned that staff of the entertainment venue had tested positive for COVID-19 on that same day. He submitted himself to testing on Friday, and was found positive.