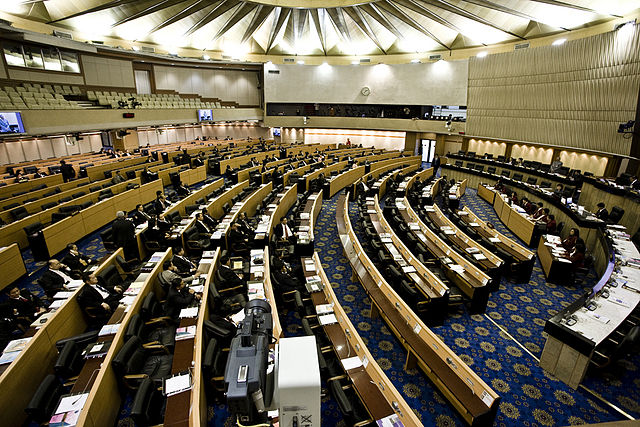 Chamber of the National Assembly of Thailand
Photo By: พีรพัฒน์ วิมลรังครัตน์ / CC BY

While the Royal Thai Government is moving towards borrowing THB1 trillion in order to revive the ailing economy, experts from the Federation of Thai Industries say that this amount is not enough.

In order to fully address the economic impact of the COVID-19, the Thai government will need to borrow an additional THB1 trillion.

According to the FTI’s chairman Supant Mongkolsuthree, the additional cash can be infused to sustain the grassroots economy.

As part of its agenda to borrow THB1 trillion, Prime Minister Prayut Chan-o-cha’s cabinet gave the Ministry of Finance the greenlight to borrow US$1.5 billion from the Asian Development Bank of ADB. This is equivalent to THB46.74 billion under the current exchange rate of THB31.16 to USD1.

The government plans to use THB600 billion or 60% of the planned THB1 trillion loan to cover financial assistance for citizens who lost jobs or had to close down their business because of the pandemic. The remaining 40% will be used to finance economic and social rehabilitation, including the creation of jobs for unemployed individuals and building community infrastructure.

The effects of the COVID-19 pandemic caused the unemployment rate to rise to 9.6% as of June, a report by the Kasikorn Research Centre.

As foreign tourism – a significant contribution to Thailand’s economic prowess – remains closed, a greater number of locals are expected to lose their jobs by end year.

Association of Thai Travel Agents president Vichit Prakobgosol warned that 80% of its members are going to close their businesses by end of the year without the level of revenues generated by foreign tourism.

The Research Centre believes the unemployment rate will improve when the emergency decree is lifted, which will allow businesses to open again and create jobs for the populace.

However, the threat of a second wave of infections could cause the rate to go even higher, the report said.

Thailand has not recorded any local transmission of the COVID-19 virus for more than 70 days. However, it continues to import new cases from Thais returning from abroad.

Two separate causes in Rayong and in Bangkok in July also caused a small scare. These cases involved an infected Egyptian soldier who went out shopping, and a state diplomat’s daughter, respectively.

Thailand is set to welcome a number of foreigners back into the country. These include migrant workers, film crews, businessmen, trade expo attendees, medical tourists, and members of the Thailand Elite visa program.

These foreigners will be subjected to mandatory 14-day quarantine and swab testing, among other public health measures mandated by the Ministry of Health.

A contingent of soldiers from the United States are also currently on quarantine in Bangkok. These soldiers will be engaging in joint exercises in Hanuman Guard with the Thai army starting August 18.

Following fresh outbreaks in China and Seoul, Thailand has currently suspended the “travel bubble” agreement that would have brought foreign tourists from these two countries and Japan into Thailand for a limited holiday.