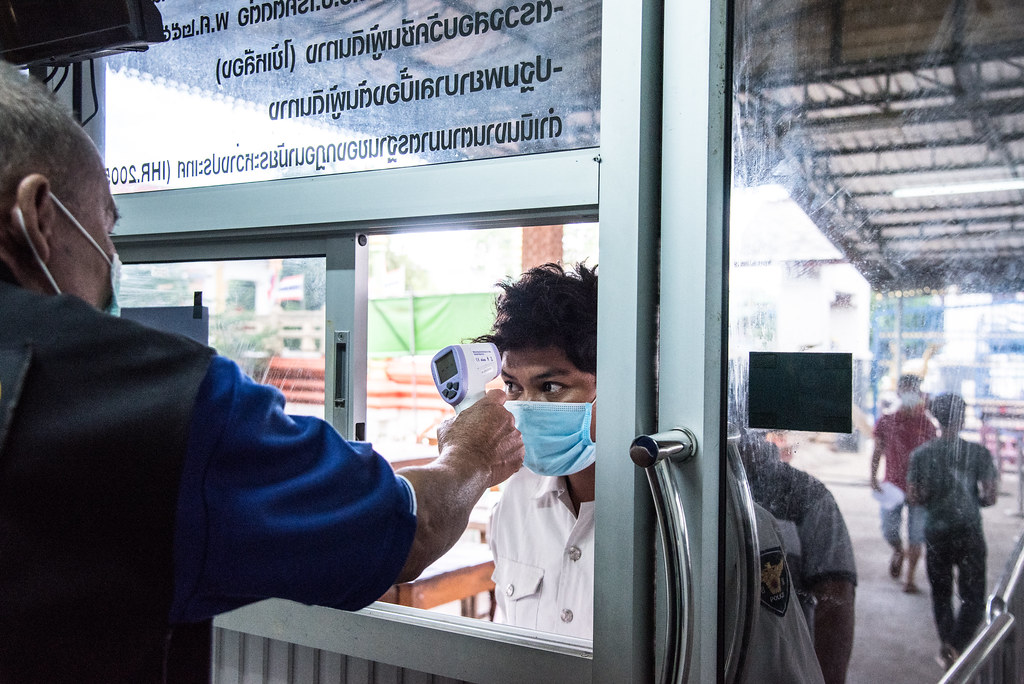 The 781 cases of local infection were found through active case finding.
Photo By: Some Rights Reserved byWHO Thailand

The government has reported another 802 new COVID-19 cases for today, Friday. 781 of these cases were found in the Kingdom through active case finding, and 21 cases came from people arriving from abroad.

Center for COVID-19 Situation Administration Taweesilp Visayunothin reported that authorities have found 692 cases through active case finding, while the remaining 89 cases were reported by hospitals, in the past 24 hours.

686 of the cases found through active case finding were found in the province of Samut Sakhon, while three cases were in Bangkok and one case each in Sa Kaeo, Rayong and Nonthaburi.

79 of the hospitals were also in Samut Sakhon, two in Ayutthaya and one in Ang Thong. Bangkok hospitals reported seven cases in the past 24 hours.

On the other hand, the Kingdom imported 2 cases each from India and Germany, 1 each from Bahrain, Indonesia, Ethiopia, Sweden, Switzerland, South Africa, the United Kingdom and Austria. 3 imported cases from the United States, 2 from the Netherland, and 2 from Saudi Arabia.

These cases are all passengers that arrived in Thailand through air travel.

Thailand’s total number of cases is now at 17,023. 66.9% of these have already recovered. 109 patients were recently discharged from the hospitals. 5,551 cases are still being treated in hospitals.

With no new deaths, the death toll remains at 76.

In addition, Dr. Taweesilp that from December 15 to January 29, today, health officials have found 12, 786 new cases. 98% of the cases were found in Samut Sakhon province. 1.2% of the cases, on the other hand, are in Bangkok.

On the other hand, global cases are now at 102.03 million. The United States continues to have the highest number of cases, with 26.34 million. The US also reported 162,574 cases in the past 24 hours.

Meanwhile, as the government continues trying to boost the ailing economy, the Labour Ministry announced that it plans to send 100,000 Thais to work abroad in fiscal year 2021.

Labour exports went down 71% from March to December last year. In 2019, 95,994 Thais had found jobs abroad. By comparison, only 9,920 Thais were able to fly overseas to work in the quarter ending December 2020.

The last batch consisted of 210 Thais and were bound for Israel. They were recruited as part of the Thailand-Israel Cooperation on the Placement of Workers or TIC, and flew yesterday.

Labour Minister Suchart Chomklin said that they have divided the quota into two groups. One group were matched with jobs through brokers or Thais employees abroad. They will be participating in training programmes and work will be of a temporary nature. 89,000 people part of this group had already flown overseas.

The remaining 11,000 people consisted of locals to be sent to work in countries that have existing labour export agreements with the Kingdom. These people have been given jobs in South Korea, Japan, Israel and Taiwan through the efforts of the Department of Employment.