No Water Fights for Songkran 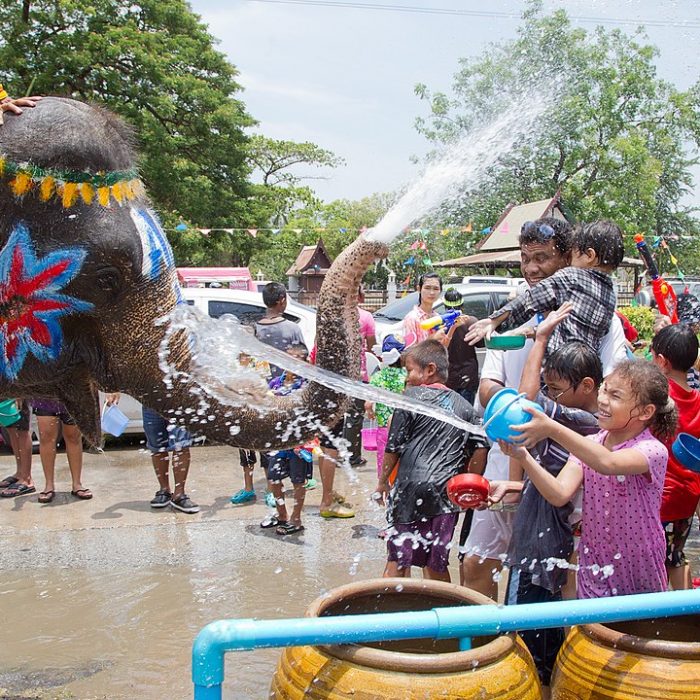 The government urges people to instead observe the traditional ways of celebrating Songkran.
Photo By: JJ Harrison (https://www.jjharrison.com.au/), CC BY-SA 3.0, via Wikimedia Commons

Thailand will not be allowing its citizens and expatriates to engage in festive water fights as was the norm in the past for the traditional Songkran Festival. The ban is in place for the second year in a row, beginning last year when the pandemic was raging.

The government’s task force on COVID-19 made the decision out of fear that allowing people to congregate in water fighting might result to another widespread infection of the coronavirus.

Thailand will be celebrating the Songkran, or the Thai New Year, on April 12 until April 15. It will also be preceded by a weekend, which means locals and expats alike get a long weekend.

Last year’s Songkran Festival was cancelled as a result of the emergency decree that called for a nationwide lockdown beginning in March. With the launch of the We Travel Together domestic tourism stimulus package, the government created several long weekends that took place during the second half of 2020 as replacements for Songkran.

The government had announced that it will be easing up on restrictions to allow people to celebrate what is considered as Thailand’s largest festival. While hopes soared, the Center for COVID-19 Situation Administration quickly shot down the prospects with a declaration banning water fights on Friday.

“Water splashing will not happen this Songkran. We must ask you to cooperate with us,” the CCSA spokesperson Taweesilp Visayunothin urged the general public during the address.

He also added that foam parties, which is another way for people to congregate and celebrate, would also not be allowed for Songkran.

Instead, people will have to focus on the traditional ways of celebrating the Water Festival for this year.
According to Dr. Taweesilp, religious activities will be allowed to take place in Songkran. People are also allowed to travel to provinces in order to visit their relatives and perform the traditional pouring of water over the elders’ palms.

Tourism operators are now seeking the help of the government to generate income for the Songkran festival now that water festivities are no longer allowed. Association of Domestic Travel president Thanapol Cheewarattanaporn said that Thais are more likely to travel to families in other provinces for the traditional celebration of Songkran rather than take leisure trips.

Mr. Thanapol said that tourist sentiment is poor due to the restrictions on water splashing as well as limited spending power.

The ADT President then called on the Cabinet to approve a proposed co-payment domestic tourism subsidy campaign, in which the government will grant 50% or up to THB3,000 in subsidies to Thais who will travel locally in support of domestic tourism.

Tourism sentiment remains low despite the roll out of vaccines to popular tourist destinations in Thailand.
The government has announced this week that it will start easing relaxations in phases, beginning on April 1st. For starters, incoming tourists after April 1 can look forward to a shorter quarantine period of 10 days.

Those foreigners who have been inoculated against COVID-19 can even expect to spend only 7 days in quarantine.