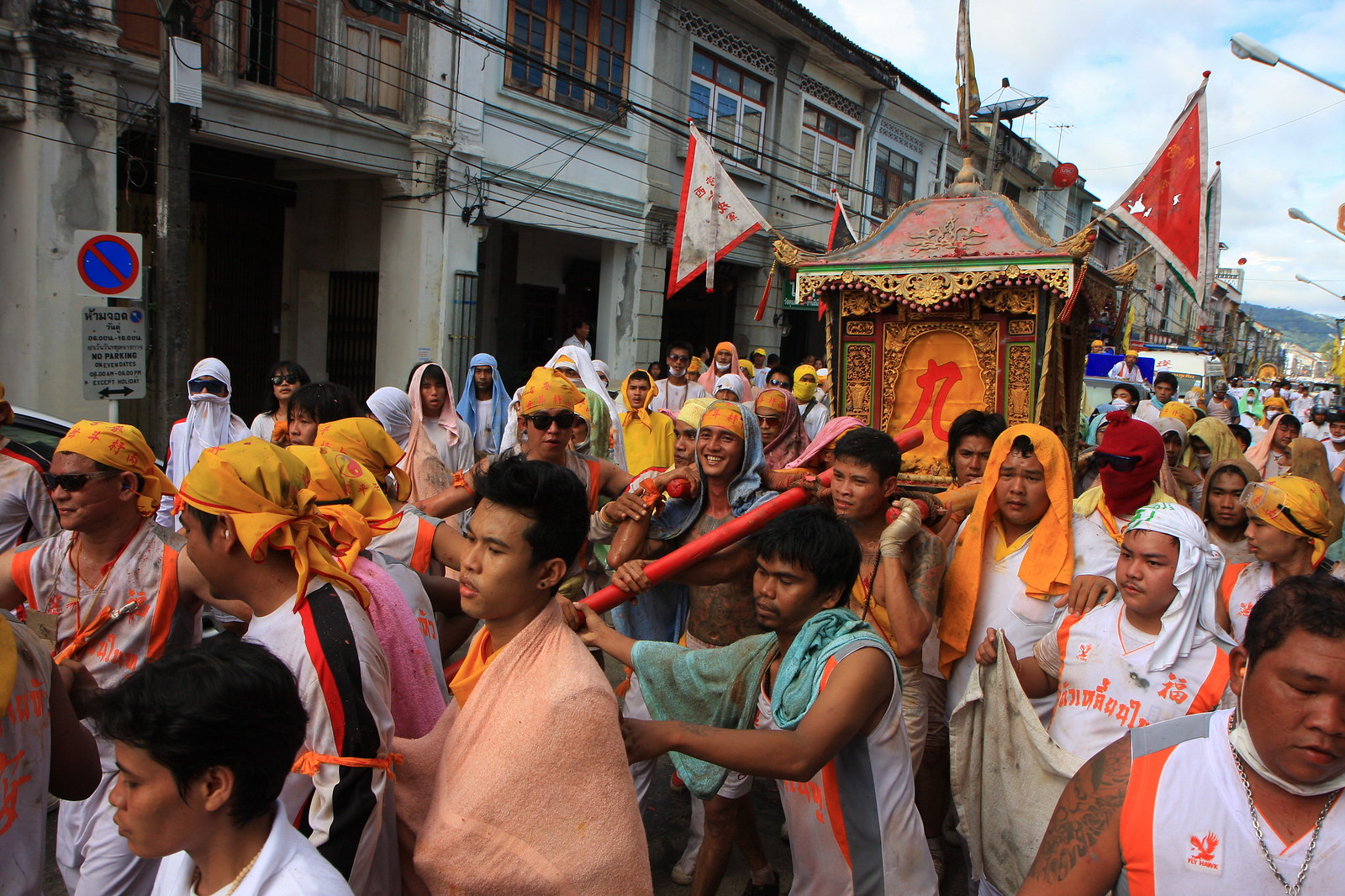 Up to 15,000 domestic tourists per day are expected to arrive for the Vegetarian Festival.
Photo By: Some Rights Reserved by Binder.donedat

Phuket International Airport is expecting a significant surge of domestic tourists between October 16 and October 25.

These domestic tourists will be made up of local Thais participating in this year’s Vegetarian Festival. The Festival is one of the most important events in Thai culture, and is particularly important to the province of Phuket.

Thani Chuangchu, director of Phuket International Airport, says that they are expecting up to 15,000 domestic tourists per day during the 9-day celebration.

This is significantly more than the number of tourists they expect during long weekends and holidays, in which the airport serves around 13,000 domestic tourists only.

Thani said that the airport is preparing to receive up to 90 domestic flights each day, for 9 days.

These spurts in domestic tourism will translate to around THB200 million to Phuket’s provincial economy. The island province is one of Thailand’s most popular tourist destinations, and its economy was one of the hardest hit by the lockdown imposed in response to the pandemic.

Phuket’s provincial agencies estimate that around 7% of tourism-related businesses in Phuket have closed down due to lack of revenues during the time of pandemic. Around 2% of these have already closed shop for good.

Last year, Phuket earned a total of THB450 billion from tourism. 85% of these revenues were generated by foreign tourism, totaling THB400 billion. The remaining 15%, or THB50 billion, was earned through domestic tourism.

The Phuket Provincial Government has called out to the National Government in Bangkok to render aid to its damaged economy, and help its businesses earn money again despite the pandemic, among other requests.

Phuket was tapped as a pilot province for the government’s current efforts to restart foreign tourism. It is going to receive the first group of tourists under the new Special Tourist Visa program.

The Special Tourist Visa will grant foreigners from “low risk” countries the ability to stay in Thailand for at least 90 days, and up to 270 days.

As part of their obligations, however, they have to agree to a 14-day quarantine in one of the government-approved alternate state quarantine hotels. They also have to consent to a barrage of COVID-19 tests strategically scheduled from arrival until the last day of their quarantine.

The government also revealed that these tourists must also agree to install a mobile app, and wear specially-designed armbands, in order to allow the government to track their whereabouts. This is part of the safety and public health measures of the government.

The first group of Chinese tourists from Guangzhou City were due to arrive on October 8. However, this group’s arrival date was pushed back to an unspecified date although Tourism Authority of Thailand Governor Yuthasak Supasorn said that they will arrive “within October for sure.”

Some reports allege that Phuket’s provincial government is still awaiting documentation from the Ministry of the Interior, while others say that fears of a second wave of infections among domestic tourists traveling to Phuket for the Vegetarian Festival led the provincial government to order the delay.