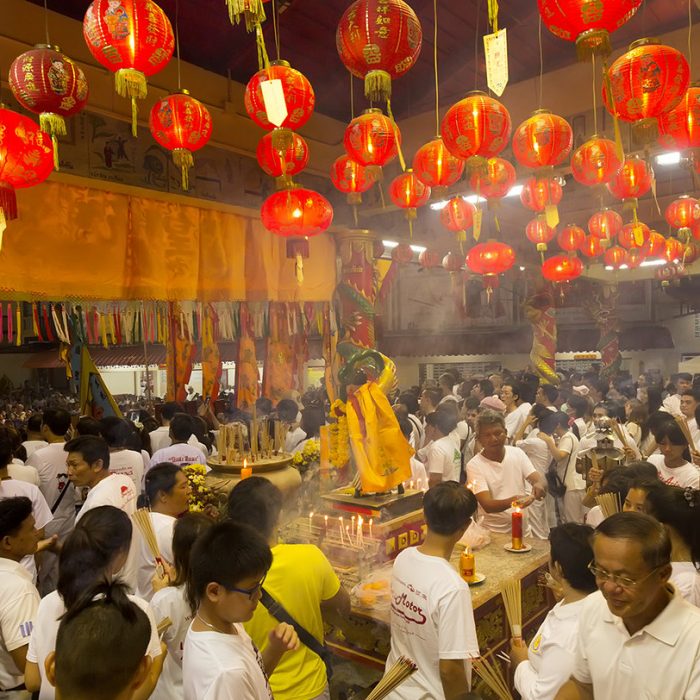 TAT Governor Yuthasak Supasorn has high hopes that the province’s economy will be stimulated by the holiday.
Photo By: Some Rights Reserved by Phuketian.S

The Vegetarian Festival begins today, and Phuket hopes to earn a significant amount of money from the event.

Authorities are talking to the tune of THB350 million, according to the Tourism Authority of Thailand.

The Vegetarian Festival is a 9-day festivity that begins today and ends in October 25. Every year, it attracts thousands of local Thais who partake in the vegan diet and witness the rituals done by mah songs, or traditional shamans who are paraded through the streets during the entire festival.

This year, TAT Governor Yuthasak Supasorn said, the festival is expected to attract 60,000 domestic tourists and earn the province THB350 million – a significant sum considering that the economy is seriously contracting due to the effects of the COVID-19.

“According to reports from 54 of 200 hotels open in Phuket, about 20% of rooms have been booked for weekdays, and more bookings were made for the weekend during the nine days of the festival,” Governor Yuthasak revealed.

He said that these tourists will be coming from provinces in close proximity to Phuket. The farthest distance, he said, is 300 kilometers from the popular island destination.

He added that there might be tourists coming from more distant regions, but that they are not expecting the number to be that high.

“Even though the number cannot be as high as past years, in a situation like this, it will help to stimulate tourism and the economy well,” Governor Supasorn said.

Last year, Phuket earned a total of THB450 billion from tourism, its biggest source of income. THB400 billion of these revenues were earned from foreign tourists, while THB50 billion came from domestic tourism.

With foreign tourism down to zero due to the pandemic, Phuket’s economy has hit nearly rock bottom.

Phuket has sought the help of the national government in keeping its economy afloat, as its financial reserves to assist its residents have reportedly run out. Expats are reporting that local people still continue to line up for food donations, provided mostly by expats and charitable organizations that have facilitated fund raising events abroad and across the nation.

Data from provincial agencies also show that nearly 10% of the businesses related to tourism in Phuket have closed down to cut costs due to lack of revenues. 2% of these businesses have reportedly closed shop for good.

Phuket is the pilot province for the government’s Special Tourist Visa program.

The Special Tourist Visa will reportedly bring in tourists from “low risk” countries and cities. These tourists can stay in Thailand for a minimum of 90 days, and a maximum of 270 days. They will be required to undergo COVID-19 testing, and mandatory 14-day quarantine.

The government had previously announced that the first group of 120-150 tourists from Guangzhou, China was set to arrive to Phuket on October 8.

However, reports indicated that the province has requested to move the arrival of these tourists to a date after the Vegetarian Festival. It appears that local Thais are wary of foreign tourists during the auspicious holidays, and Phuket has asked to postpone the tourists’ arrival to give way to domestic tourism.