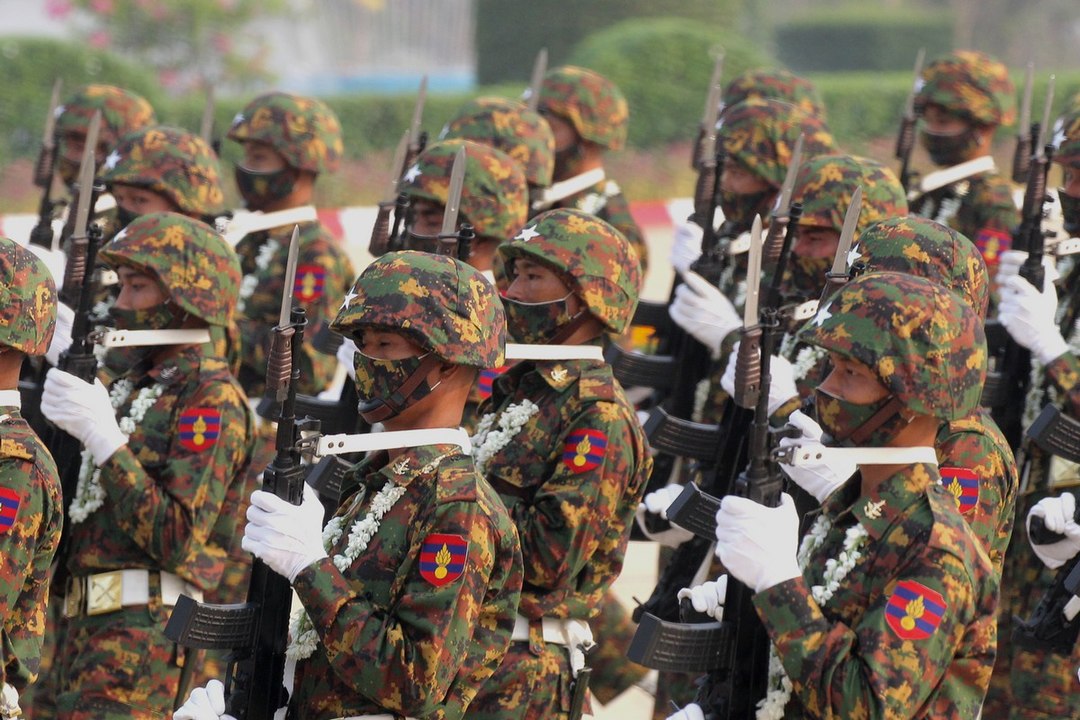 The Myanmar troops had a fired warning shot to stop the boat so they can board and search the vessel, sources say.
Photo By: Mil.ru, CC BY 4.0, via Wikimedia Commons

Sources within the security forces of the Kingdom has reported that Thai border patrol officers have been fired upon by troops of Myanmar’s military that occupied the opposite bank of the Salween River.
These officers monitored the Thai border with Myanmar at the village of Tha Ta Fung, in Thailand’s Mae Hong Son province.

According to the sources, the vessel was a civilian craft but were carrying border officers patrolling the Thai side of the demarcation. This development followed weeks after thousands of Karen refugees attempted to cross this part of the Thai-Myanmar border to flee the airstrikes carried out by Myanmar’s military against their homes.

The airstrikes were a retaliation by the military junta after armed members of the Karen National Union blockaded a military convoy bringing supplies to government troops.
The KNU, together with other ethnic groups, has pledged support for the protesters and expressed opposition to the coup.

As a result of the airstrikes, thousands of ethnic Karen fled their homes and encamped near the Thai-Myanmar border. Actions by the Thai border authorities prevented an influx of refugees into Thailand, but troops and humanitarian groups are dispending aid to the displaced Karen.

The refugees are currently encamped in the jungle on the banks of the Myanmar side of the river crossing.
Humanitarian groups also claimed to have been fired upon by Myanmar troops when they attempted to deliver aid to the displaced Karen across the border.

The sources added that there were no injuries, and that the Myanmar military forces were signaling their intent to stop and search the vessel before they were to be allowed to continue with their patrol.
“The Myanmar military unit was concerned about boats sending supplies to their opponents on the other side,” one of the sources within the state security forces explained.

One restaurant owner in the Thai side of the river witnessed the incident, and said that the Myanmar troops fired upon the water beside the boat. She said the incident had frightened several fishermen in the area.
“[T]hey don’t want to take their boats out,” she said.

The Thai Ministry of Defense has assured the public that all relevant agencies and armed forces have been told to maintain readiness should something drastic happen across the border. These include problems and the impact from the violent situation and fighting in border areas,” the Ministry said.

The ongoing troubles are connected with the February 1 coup d’etat by the Myanmar military that deposed many of the civilian leaders, including Aung San Suu Kyi.

The military junta’s ongoing campaign against dissent and opposition to its government has resulted in more than 740 deaths, and has branched out to conflict with various ethnic groups, including the Karen National Union, that reside across the border with Thailand.

Analysts feel that the ongoing violence can quickly lead to all out civil war in Myanmar.
The Association of Southeast Asian Nations, of which Thailand is a member, is due to meet with Myanmar junta commander Min Aung Hlaing today.