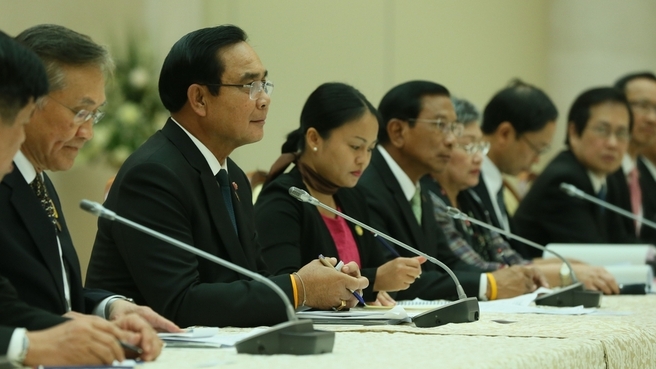 Prime Minister Prayut Chan-o-cha in a meeting.
Photo By: Government.ru / CC BY

As Thailand explores ways to revitalize the economy damaged by the COVID-19 pandemic, Prime Minister Prayut Chan-o-Cha ordered two of his government agencies to work on creating guidelines to oversee the entry of foreigners into Thailand.

As reported earlier, Thailand is getting ready to welcome eleven groups of foreigners to return to Thailand. These include migrant workers, film crews, trade expo attendees, permanent residents and foreigners married to local spouses.

The entry is expected to be gradual. For now, Minister Prayut wants the government to focus on businessmen that need to conduct negotiations with potential partners in Thailand, as well as foreigners that perform specialized functions in their industry in Thailand.

Minister Anutin also added that the measures are necessary to allow the country to slowly resume economic activities. The government wants to strike a balance between public health and safety, and economic stimulation.

The measures also need to be acceptable to all sides in all sectors of Thailand, he said.

He also added that the Cabinet will be flying to Rayong on August 24 to 25 to hold a mobile meeting. This is a move to boost public confidence in the province, following a scare last month after an Egyptian soldier infected with the COVID-19 went out shopping.

This also coincided with the arrival of a young Sudanese woman who also tested positive for COVID-19 in Bangkok.

No positive cases of COVID-19 among the locals resulted from these two incidents.

Thailand is currently on its 71st day without a case of local transmission. However, it has recorded 7 news cases as of Wednesday.

Five cases were all Thai students that returned home from studying in Egypt. The sixth case is a Thai woman returning from Dubai on a trip, while the final case is a female Thai teacher that flew in from the United States on July 31st.

These bring the total number of COVID-19 cases in Thailand to 3,328. 3,144 have fully recovered, while 58 of the cases have resulted to fatalities.

Thailand’s recovery and death rates are at 94% and 4%, respectively.

Concerns for public safety has put the future of foreign tourism, from which Thailand derives a huge part of its GDP, up in the air. The country was expected to reopen to foreign tourism in October with a “travel bubble” agreement with the countries of Japan, South Korea and China.

However, South Korea and China recorded fresh outbreaks of the COVID-19 in the middle of June. This has put the negotiations for the travel bubble on indefinite hold.

Tourism and Sports Minister Phiphat Ratchakitprakarn and Tourism Authority of Thailand Governor Yuthasak Supasorn met on Wednesday with representatives of the Association of Thai Travel Agents, who presented the “Safe and Sealed” plan designed to be a more flexible revision to the earlier travel bubble arrangements.

Governor Yuthasak said that the plan is designed to bring in 500,000 foreign tourists to Thailand to aid the tourism industry. Minister Phiphat will be presenting the plan to the Prime Minister and government agencies for consideration.