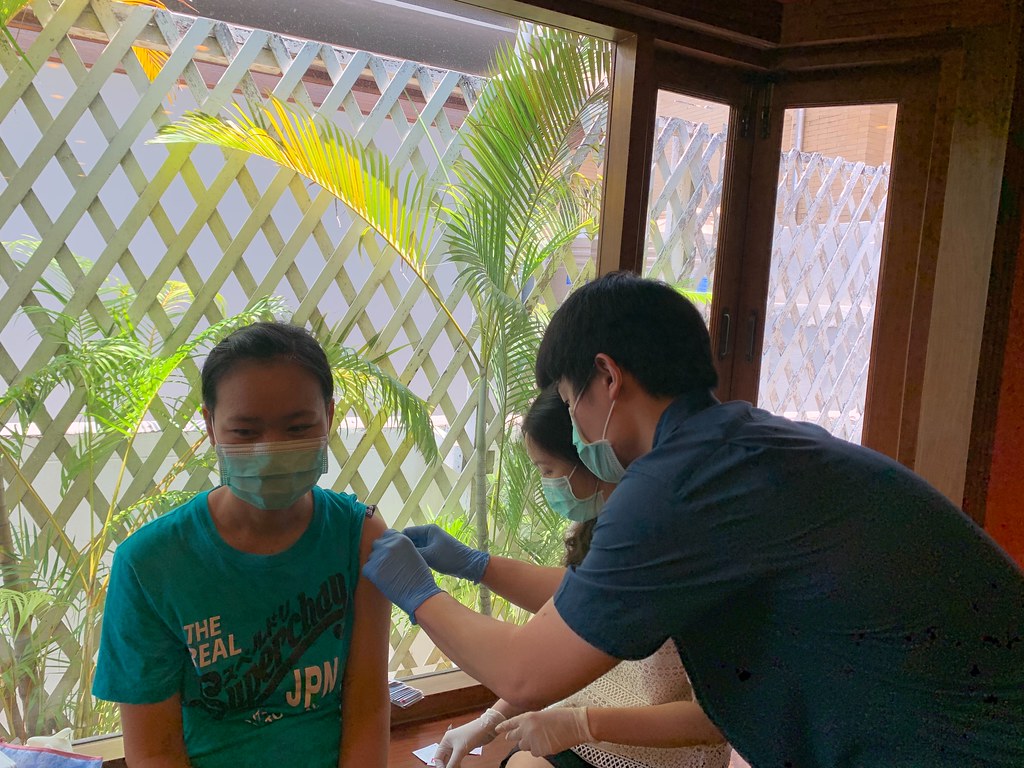 In addition, Ministers have agreed to be vaccinated as early as this Friday.
Photo By: Some Rights Reserved byILO in Asia and the Pacific

Thailand is set to receive a second batch of doses of the COVID-19 vaccine manufactured by the Chinese pharmaceutical firm Sinovac as part of the government’s agreement with the company.

According to Minister of Public Health Anutin Charnvirakul, a second batch of 800,000 doses will be arriving in the Kingdom on March 25.

Mr. Anutin said that they, the members of the Cabinet, will be receiving their jabs on Friday, including Prime Minister Prayut Chan-o-cha.

Ministers who are aged below 60 years old will be receiving the Sinovac vaccine, while those older than 60 years like Prime Ministers Prayut will be given the AstraZeneca vaccine, nearly 200,000 doses of which arrived in Thailand together with the Sinovac doses.

After receiving their shots, the ministers will be observed by health authorities for the first 30 minutes to see if they experience any side effects from the vaccine.

Foreign Affairs Minister Don Pramudwinai and Deputy Education Minister Khunying Kalaya Sophonpanich have stepped up to receive the vaccines. Both Ministers are over 60 years of age.

In addition, Deputy Prime Minister Prawit Wongsuwon said that he is consulting with medical experts about being vaccinated. He said that he will let doctors decide on when he will receive the jab.

Deputy Public Health Minister Sathit Pitutecha has reported no side effects from the Sinovac jab. Others who have already received their shots have reported only mild symptoms from the inoculation.

Furthermore, Minister Anutin said that there are two other companies who are applying for approval from the Food and Drug Administration in addition to Sinovac and AstraZeneca. The Minister said that they have received applications from Johnson & Johnson and Bharat Biotech Technology of India.

Prime Minister Prayut has given the FDA orders to look into the possibility of allowing private hospitals to procure their own vaccines independently.

Several local administrations and members of the private sector have expressed interest to purchase COVID-19 vaccines as early as December. Businesses in Phuket, for instance, have stated that they have set aside funds to acquire vaccines with which to inoculate their staff.

This is to speed up the process and allow for the opening of the island province by October.

Department of Medical Sciences Supakit Sirilak said that they are currently testing 23 doses of the COVID-19 vaccine made by AstraZeneca. They will take up to three days for the testing process and approve the vaccine for use, which means Prime Minister Prayut’s scheduled vaccination on Friday is just in time for the department to finish its testing.

In related news, the Acting Chinese Ambassador Yang Xin said that his government and officials from the Kingdom are currently in talks to implement a vaccine passport system. The system will allow tourists from both countries to waive the 14-day quarantine period as long as they can present documentation that they have been vaccinated against the COVID-19.

Ambassador Yang called for the Thai government to set up vaccination centers for Chinese expatriates coming to Thailand.