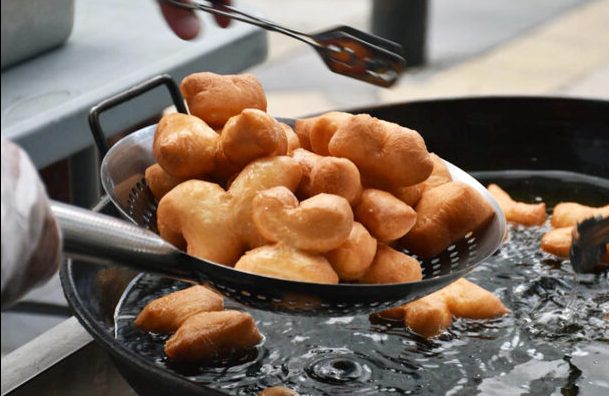 It may be experiencing financial woes, but that didn’t stop Thai Airways from branching out into an unlikely source of income that earned it an impressive THB10 million per month.

This was disclosed by Thai Airways acting President Chansin Treenuchagorn this week that the airline’s “pa tong go” or deep fried dough fritters side project has raked in THB400,000 to THB500,000 per day. This translates to THB10 million.

President Chansin highlighted the “very good reception” from their customers regarding the “pa tong go” project, and stated that they are looking to expand or monetize further this side project in order to earn more income.

Mr. Chansin said that they need to “meet the demand and reach out to more customers.”

However, the Thai Airways acting chief did not elaborate further by specifying a business plan, nor the operating costs it incurred for the “pa tong go” project.

The “pa tong go” is just one of the delicacies that the airline sold in its offices and bakery outlets, specifically in Puff and Pie outlets at Or Tor Kor Market, Don Muang Airport, Thai Catering’s Don Muang office, and in its Silom and Chiang Mai city bakery outlets.

Apparently, part of the appeal of the “pa tong go” is its inexpensive price – it is usually sold at 3 pieces for THB50. It is so popular with the common populace that stalls can sell off their entire stock in 2-3 hours in the morning.

Thai Airways is currently undergoing a bankruptcy rehabilitation process, which it initiated in May after sustained losses due to the pandemic and the resulting lockdown. The company had reported a total liability of THB332 billion, which it is unable to settle due to serious losses brought by the pandemic.

It had attempted to negotiate a bailout loan from the government totaling THB54 billion, but to no avail.

As part of the restructuring, the government reduced its shareholdings in the national carrier in May. The government now holds only 47.86% in the company, from the previous 51.03% majority stake. Proceeds of the disposal were deposited into the Vayupak Fund 1, managed for the Finance Ministry by Krungthai Asset Management since 2003.

Thai Airways is no longer a state enterprise following the reduction of shares by the government, which experts think may lead to privatization of the previously state-operated carrier.

Other experts state that this could be advantageous to the carrier.

Thai Airways continues to operate while its debt restructuring plan is being negotiated. It has previously operated charter flights that ferried home stranded foreigners and brought back expatriated Thais from abroad.