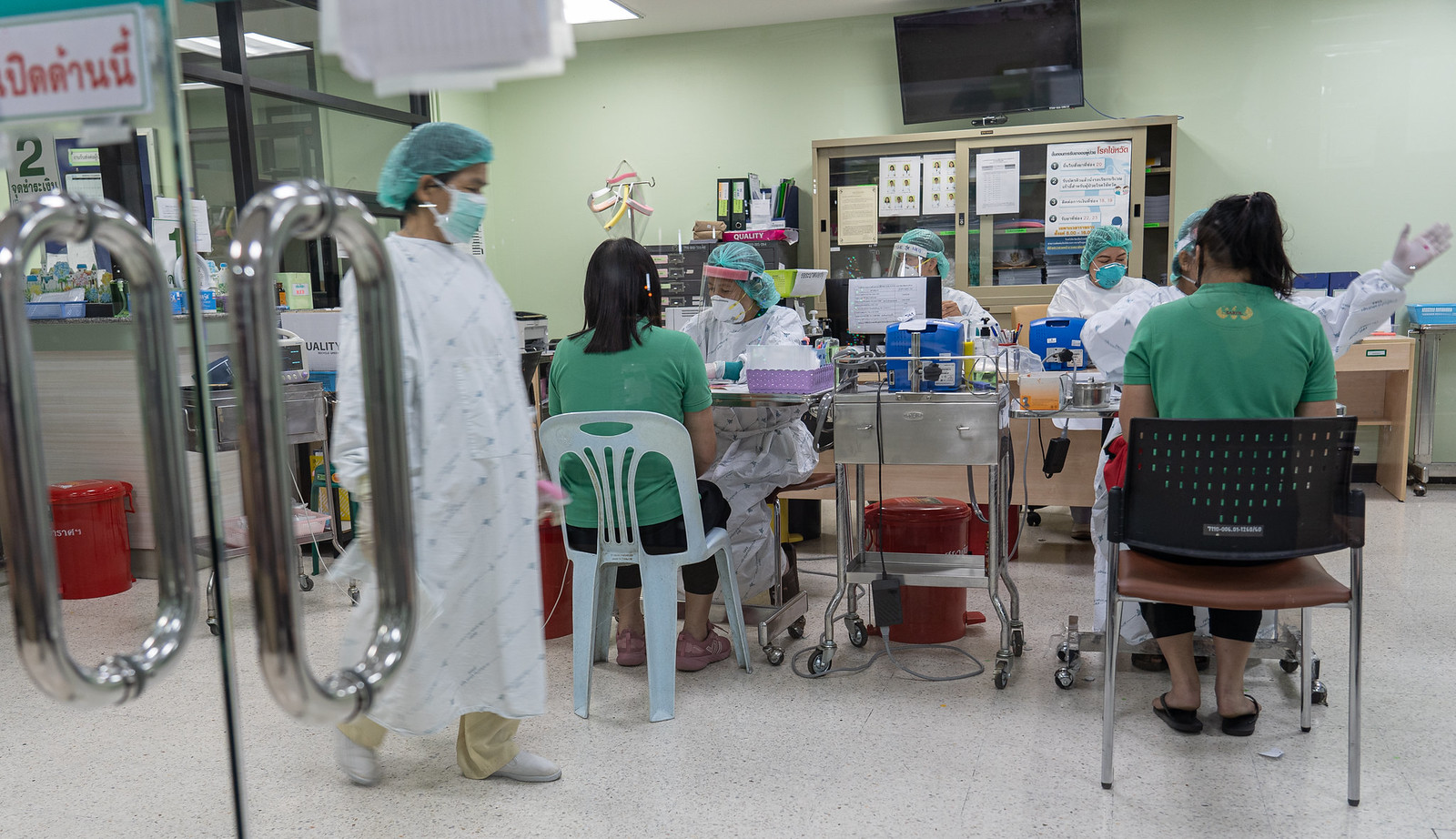 All five worked at the certain ASQ facility in Bangkok and became infected between December 2 and December 6.
Photo By: Some Rights Reserved byUN Women Asia & the Pacific

The government had announced yesterday that five health workers were among the new cases reported in the country. In this case, all five frontliners were working at one point in an alternative local state quarantine (ASQ) hotels near the capital, Bangkok.

In a related report, the Bangkok Metropolitan Administration launched a press briefing and described the timelines of the five infected personnel. In summary, BMA Spokesperson Pongsakorn “Earth” Kwanmuang said that their infection is a result of working with medical personnel in the ASQ facilities and with people undergoing quarantine.

According to Mr. Pongsakorn, the BMA and the Department of Disease Control have undertaken the necessary containment procedures. These include disinfecting the patients’ residences in order to protect their families from the virus.

Mr. Pongsakorn also issued instructions to medical personnel to exercise care in performing their vital duties. If they experience any symptoms, they are advised to take a COVID-19 test immediately.

The BMA spokesperson laid out the timeline of the health workers as follows:

The BMA said patient 1 most likely came into contact with the virus when she took a shift at an ASQ facility near Bangkok in December 1.

Patient 1 embarked on an MRT train to travel to Thonburi. After her job interview there, she took a BTS train back to Bangkok. She then developed symptoms while working at a private hospital in December 3, after she decided to take a COVID-19 test.

She got informed of her positive result while receiving treatment at a private hospital on December 4.

Patient 2 also went to an ASQ facility in Bangkok, where she was tasked to collect laboratory samples. She came into contact with another health worker while not wearing a face mask on December 2.

On December 3, she admitted an infected person in an ASQ facility also in Bangkok to a hospital. On December 4, she took a COVID-19 test and was informed the same day that she was positive for COVID-19.

She received her positive result while receiving treatment at a private hospital on December 6.

Patient 4 came into contact with Patient 2 on November 27, during a work break. Afterwards, she took the temperatures of a Russian mother and daughter being quarantined at the ASQ hotel.

She worked together with patients 1 and 2 at an ASQ facility in Bangkok the next day. She went into the Wat Khaek Market to purchase food, but had worn a face mask all the time.

She continued working with Patient 2 at an ASQ facility on December 2. By December 5, she was suffering from diarrhea and decided to take a COVID-19 test. Her results came back positive the next day, December 6.

Patient 5 worked at an ASQ facility in Bangkok on December 3 and December 4. She worked with Patient 2 on the second day to administer swab tests to quarantined people in an ASQ facility.

She took a COVID-19 test after hearing about the test results of the other four patients on December 5. She admitted herself to a private hospital for treatment on December 6 after receiving her positive results.

Mr. Pongsakorn assured the public that their offices can contain the spread of the disease, but also urged people coming into contact with people in places most at risk for infection to strictly abide by public health and safety measures.

“[E]veryone must protect themselves from the disease by wearing a face mask, washing your hands regularly, maintaining social distance and avoid going to risky areas,” he added.