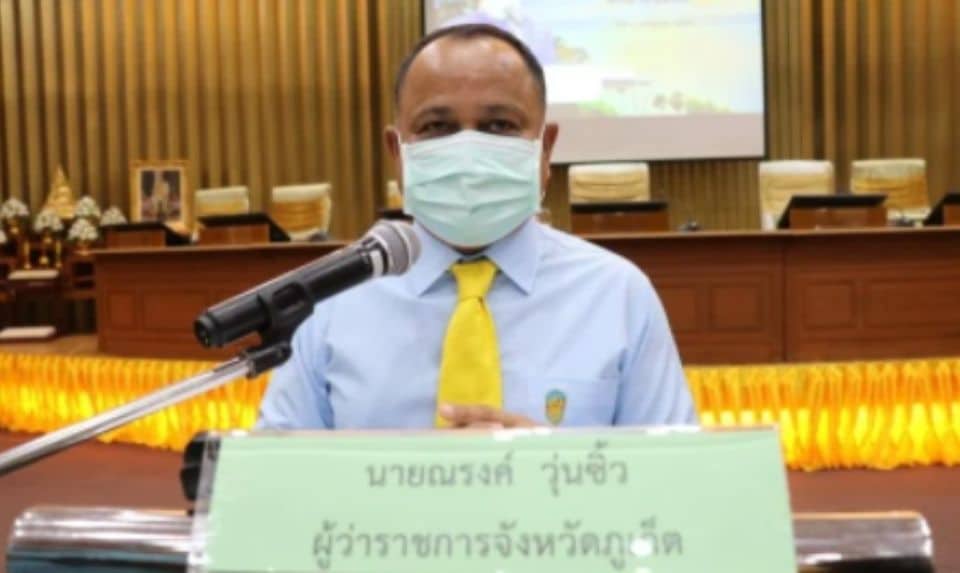 Phuket Governor Narong Woonciew has assured that the Phuket Sandbox scheme will continue, despite the rising number of infections on the island. Photo: PR Phuket

On Monday, 114 local infections have occurred on the island within the past seven days – a reason enough to begin trying to find a stop to the Phuket Sandbox Scheme since the 90 infections limit established by the middle for the COVID-19 Situation Administration in Bangkok late last month.

“The Phuket Sandbox program continues. The current situation has not hampered the opening of Phuket to totally vaccinated tourists without quarantine. We believe the new COVID prevention measures announced in provincial order will help control the spread.” – Governor Narong

Natapanu Nopakun, Deputy Director-General of the Ministry of data and Deputy Speaker of the Ministry of Foreign Affairs, stated the factors for re-examining the Phuket Sandbox Scheme on June 22 as a part of the national COVID briefing of the CCSA. Last month, Mr. Natapanu stated that 90 infections per week in Phuket would be a criterion for reconsidering the scheme or making adjustments. It is also a criterion that every one of Phuket’s three districts is included, of which at least 6 villages are affected.

“If there are COVID cases and there are no linkages found and no contact tracing is possible, that would be another criteria,” Mr Natapanu continued. “He also stated that if the hospital bed’s capacity surpassed 80 percent, it would be another factor to consider.”

If the situation in Phuket worsens after the province opens its doors to the general public on July 1st, Mr. Natapanu has warned that the box schemes are re-examined.

He said reducing commercial activity, increasing “Sealed Route” travel, and increasing the quarantine of hotels may all happen as a result of revising the Phuket Sandbox scheme.

At worst, they might have to stop the Sandbox program in Phuket, Mr. Natapanu said.

“We will just go with the plan. If we get 90 new cases in a week, we can still handle them.” He said that we must maintain a healthy balance between disease control with economic recovery.

To keep our people safe, Governor Narong said this morning, “The situation outside the island is getting worse.”

However, he did not indicate that the Phuket standards will face further review after a number of new procedures have been implemented last week, strengthening control of who may be entering Phuket.

When asked whether measures to close certain sites will limit the number of new infections, for example, all schools and Central Phuket shopping malls, Governor Narong stated, “I would say it isn’t the first time this has happened for a problem of this kind. There are more and more cases. From the past, we have learned that closing and locking can lower the number of cases, and we also have tight entrance criteria at present.

“We have serious procedures to admit newcomers that are supposed to help and protect our people against infection outside the province.”

“We have definite actions throughout the island. If there are many new cases of infection in some locations, we will dispatch our healthcare staff proactively to screen and bring high-risk persons into local quarantine,” he said.

“It’s important that we continue to operate the Phuket Sandbox. For just a short time, the island has been reopened [to tourists] and we have already got extremely promising indicators of economic revival,” he said.

“Today, we’re dealing with issues that businesses must consider while managing disease control. I need to gain understanding and cooperation from the operators and the locals. We must safeguard the general population on the island from losing their benefits.” Governor Narong stated.

PPHO Chief Dr Kusak last night that the number of new infections was expected to remain high for the immediate future.

“In the coming week, I expect that the number of new cases will remain at 20-plus because one infected case can at the minimum infect five high-risk people. Right now, more than 440 high risk contacts are in local quarantine [LQ],” he said.

“We need to work quickly to have new infected cases entered into treatment and take high risk contacts into the local quarantine,” Dr Kusak continued.

Dr Kusak also pointed out that his office is pushing to further protect the public from infection through third vaccination injections to help boost immunity to the virus.

“For the third booster vaccines [sic], the PPHO and Vachira Phuket Hospital have already filed a request to the Ministry of Public Health to ask for the doses of vaccine. We need to prioritise groups of people to receive the third injection as we have done before,” he said.

Dr Chalermpong Sukontapol, Director of Vachira Phuket Hospital, last night added, “We already provided a third dose of vaccine to medical staff last week. Next, [third] vaccine injections will be provided to frontline staff, including those who work in disease control and have contact with Sandbox arrivals.

“Right now, we have 17 ICU rooms, and the number of beds occupied is not very high because our people have been vaccinated and have very low potential to become red-zone patients [sic],” he said.

Some 90% of the people in Phuket currently receiving treatment for COVID-19 infection were what Dr Chalermpong called “green-zone patients”.

“About 3-4% of patients are considered to be red-zone patients,” he added, without giving any specific figures for either category.

“At Vachira Phuket Hospital, we will increase the number of ICU rooms to 27. If combined with other hospitals, we will have about 50 ICU rooms on the island,” Dr Chalermpong said.

“We have about 200 normal rooms for isolation and group-patient rooms, and we can add an extra 100 rooms. At the field hospital at PSU [Prince of Songkla University Phuket campus in Kathu], we have 170 beds. Of those, 75 beds are occupied,” he continued.

“However, right now we have a lot of green-zone patients, so we need to prepare the PRU [ Phuket Rajabhat University in Rassada] as another field hospital with 70 beds in the first phase and a total of 195 beds in the second phase,” Dr. Chalermpong said.